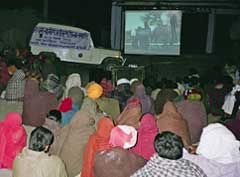 In an effort to educate people on environment and conservation, the Centre for Science and Environment, New Delhi, travelled to remote parts of the country, armed with a collection of films and documentaries.

The travelling film festival first went to Laporiya, Rajasthan, for which the films were especially dubbed in Hindi. They were screened at five villages in Jaipur and Tonk districts. Discussing traditional systems of water conservation, the films drew debate and discussion, prompting the villagers to inquire about the water harvesting structures in other parts of the country.

The second act of the festival --'Environment -- Beyond Trees and Tigers', was held at Bhubaneswar. Even after facing frequent natural disasters, the people of Orissa are not fully aware of the real causes of the disasters. The two-day festival was focused on bridging this gap. The 11 films and a panel discussion were focused on climate change, which drew an enthusiastic response from all.