Have Indian meteorologists at last found their 'role model'? After getting a lot of flak from politicians and the public for last year's erroneous prediction of rainfall, the New Delhi-based India Meteorological Department has revamped its monsoon forecast system and introduced three new models 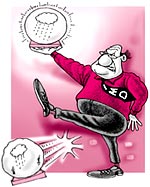 have Indian meteorologists at last found their 'role model'? After getting a lot of flak from politicians and the public for last year's erroneous prediction of rainfall, the New Delhi-based India Meteorological Department (imd) has revamped its monsoon forecast system and introduced three new models. The overhaul, which follows the burial of the '16-parameter power regression model', advances the forecast by over a month.

Even the new models do not depict a rosy picture, with imd not ruling out the possibility of a drought. For the first time in the history of monsoon forecast in India, the word 'drought' has been used to define deficit monsoons. This might have been impelled by the consecutive droughts witnessed in the last five years, particularly last year's all-India drought. imd was under tremendous political pressure to develop a drought-specific model. In fact, the organisation had been testing the new models for the past six years. Government officials found the 'values' of these models far better than the estimates of the previous version.

R R Kelkar, director-general of imd , asserts that meteorologists had been concerned about the decline in the statistical correlation of many old parameters with the monsoon. But when asked why it took imd so long to develop the new models, he said: "We do not change a winning cricket team, do we?" The old model, introduced in 1988, was used for the longest time period -- 15 years.

Now, there are two main models -- an 8-parameter power regression model that can give a forecast by mid-April, and a 10-parameter model that gives an update by mid-July. The meteorologists have also refined the definition of a 'normal' monsoon by categorising it further -- below normal, near normal and above normal. Including these, there are now five categories of weather conditions that may prevail during a monsoon season, with the other two being 'drought' and 'excess rainfall'.

The models continue to use six parameters of the earlier version, but leave out the other 10 that showed a weak statistical correlation with the monsoon (see: 'Normal >> less than', January 15, 2003). Of these, six relate to weather conditions prevailing during April and May. "These parameters have actually been adding 'noises' to the forecast," says M Rajeevan, director of imd 's Pune-based long range forecasting division. The new models have only two parameters relating to the Indian subcontinent. The models were developed using data for 38 years (1958 to 1995).

Using the 8-parameter model, imd forecasts this year's rainfall to be 'below normal' -- 96 per cent of the long period average (lpa) of 88 centimetres. Rainfall ranging between 90-97 per cent of lpa now falls under the below normal category, whereas, near 'normal' and 'above normal' are 98-103 per cent and 103-110 per cent of lpa respectively.

Another first is a probabilistic model (the third model), which works out probability values for the five new categories. The probability for a drought this year is said to be 21 per cent. Had the model existed in 1987 -- a severe drought year -- it would have shown a 95 per cent possibility of a drought. The value would have been five per cent for 1988 -- an excess monsoon year.

If the anticipation of dry conditions comes true, then 17 states already affected by drought face another scorching season. For six of them, it would be the sixth consecutive drought. According to the Planning Commission, the agriculture sector would need three bumper monsoon years to recover from the slump, which can be augmented by a probable drought. According to the Union ministry of agriculture, 152 lakh hectares of arable land has already been affected by last year's drought (104 lakh hectares: kharif crops; 48 lakh hectares: rabi) . The slightest of deviations in the monsoon would lead to an acute crisis.

With inputs from Richard Mahapatra