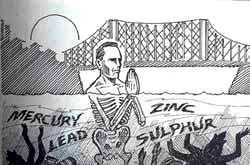 Pollution levels in the Hooghly river rise sharply after the idols are immersed at Durga Puja, revealed a study done three years ago by J J Ghose of Calcutta University. Though publication of the study had been held back for fear of offending religious sentiments, the state has now realised the gravity of the situation.

Ghose says idol manufacturers are increasingly using chemical paints instead of natural dyes. Several coats of paints containing oxides of mercury, zinc and lead, are applied on the idols along with the "thinner", which is a petroleum product. The study says an average 4 kg of paint is applied to each of the more than 2,000 idols of Durga alone that are immersed every year. And if you add to this the idols of Ganesh, Kartik, Lakshmi and Saraswati, the study estimates the total amount of paint being submerged in the Ganga at approximately 15 tonnes, which cause the levels of mercury, chromium and copper and zinc sulphites in the river to increase by as much as 20 times the normal between October and January. The level of pollutants falls only during the monsoon, when there is more water in the Hooghly.