In a dirty state 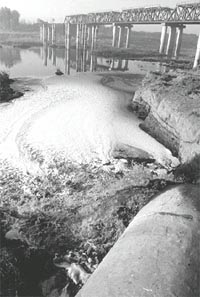 for India's highest growth state, this is bad news. The state government has finally admitted that Gujarat is the most polluted state in the country. According to the latest report of the Gujarat Ecology Commission, a state funded autonomous body, industrialisation has taken a toll on the ecology of the state.

This is corroborated by the state government in its Human Development Vision 2010 document. The state's policies which encourage the setting up of chemical industries is responsible for the pollution. Greenpeace, an international pressure group, claims that the state's common effluent treatment plants ( cetp s) are not equipped to deal with the problem. " cetps are not properly monitored," says K V Bhanujan, chairperson of the Gujarat Pollution Control Board (GPCB). According to him, one industrial unit is closed every day by the gpcb for violating the Environment Protection Act. "The laws are strict, but their implementation is weak," rues Bhanujan.

Another drawback is the way environment impact assessments (eias) are conducted. Environmentalists claim that eias are a farce as an industrial unit is first set up and then the assessment is done. Rohit Prajapati of Paryavaran Suraksha Samiti, a Vadodara-based non-governmental organisation says: "The eias are redundant as they are done only after the units start operating.