In absence of domestic markets, organics of the poor head North 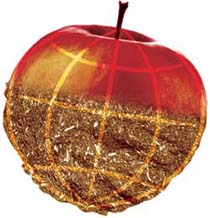 Organic agriculture is practised in more than 120 countries. Over 31 million hectares in 633,891 farms are certified organic

Oceania has about 40 per cent of the world's organic land. Europe has 23 per cent, and Latin America 9 per cent. But Oceania has less than one per cent share of the global organic food and drink sales. The us is the leading producer and exporter of organics. Land under organics in North America has grown by 30 per cent

A lot of the organic produce come from forests. Bamboo shoots account for 36 per cent of total organic produce, followed by fruits and berries (21 per cent) and nuts (19 per cent) 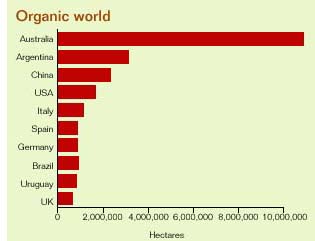 Organic farmers in poor regions like Africa sell organic products to the North, while they eat food grown with chemicals. Export is the main driver of organics in Latin America. From coffee and bananas of Central America, to sugar in Paraguay and cereals and meat in Argentina, the trade mostly depends on exports

Global sales of organic food and drink have increased 43 per cent from us$23 billion in 2002 to us$33 billion in 2005. Six of the g7 countries account for 84 per cent of global revenues from organics' sale

Lack of acceptance and recognition dog certification and accreditation systems in the world. Their multiplicity affects organic agriculture. In Africa, certification problems for organic produce inhibits people from supplying to the export market

40 per cent of the certification bodies are approved by eu, 32 per cent have International Organization for Standardisation's accreditation, and 28 per cent are accredited in the us 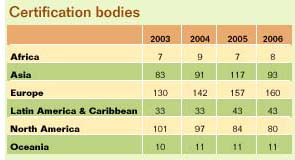 To harmonise the working of certification bodies, ifoam, Food and Agriculture Organization and United Nations Conference on Trade and Development formed the International Task Force on Harmonization and Equivalence in Organic Agriculture on February 18, 2003, in Nuremberg