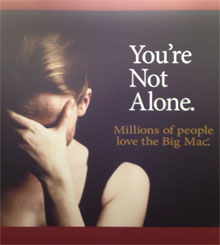 McDonald’s has come under fire for a recent ad campaign which speaks about its Big Mac burger in the same breath as mental illness. The ad, which appeared on the Boston transport system in early April, showed a woman covering her face with her hand next to the slogan: “You’re Not Alone”. Underneath in smaller font were the words: “Millions of people love the Big Mac.” The 1-800 number on the bottom of the ad connected to a McDonald’s customer helpline.

The ad went viral on social-media and drew criticism for its apparent attempt to make light of those suffering from mental health problems. Law professor at the Suffolk University, David Yamada, wrote on his blog Minding The Workplace: “The ad writers and executives in McDonald’s high-priced marketing operation missed the boat badly on this one.”

McDonald on its part blamed its Boston franchisee. “We can confirm this ad was not approved by McDonald’s. And, as soon as we learned about it, we asked that it be taken down immediately,” a spokesperson of the giant said.