Light amplification by stimulated emission of radiation, well... laser was, naturally, thought to be a superheater. But, soon it will be used as a cooling agent 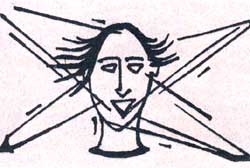 THE race of the cooling business may be (the marketing mandarins of refrigerator companies can sl 'it up each other) hotting up, but how about a laser- operated fridge? Neighbours' envy, owners' pride and all that... but optical refrigeration technology is no longer sci-fi. It has just been patented in the us, and, is a device which can tuip - under the right 'conditions - a hot laser beam into a bright light which can cool (and not heat) objects. Scientists at the Los Alamos National Laboratory in New Mexico, usA, have dem onstrated. that optical refrigeration is now at last possible. While it had been accepted as a theoretical possibility since the '209, that bright light could be used to chill solids, advances in materials and techniques were required before it could evolve from theory to practice.

Most of us think of a laser beam as a weapon of light with a burning point so hot, that it can slice ilirough most solid objects in a split second. But since that tool and,power can also be exploited for more than just one purpose, the future image of lasers may soon include the idea of laser beams cooling objects.

To, create laser cooling, the Los Alamos scientists shone A beam' of, infrared light nearly as intense as the light at the sun's surface, on to a, 1/4 inch slice of ultra-pure glass that had been doped, or impregnated, with ions of the element ytterbium (a rare earth).

Excited 'by the laser beam's pulse of energy, ytterbium vibrates at much higher frequencies than the ultra-pure glass. Consequently, the ytterbium ions radiate more energy than is - actually absorbed by the glass, and the glass-ytterbium composite as a whole becomes cooler.

What are the potential applications 'Of this inverted laser process? In the harsh environment of space, this new solid-state, vibrationless technology would be robust enough to survive and function for years while being used in satellites to cool infrared cameras and detectors or superconducting relays for cellular, phone calls.

In homes, it could be used to enable superconducting circuits to operate tens or hundreds of times faster than the conventional electronics of today. One can equate its use to that of a supercomputer in one's kitchen.

What is the theory behind this new technology? Normally, light hitting a solid object deposits energy as heat. But what has been learnt at Los Alamos is that under. some well-defined and controlled circumstances, a 'tuned' laser light can absorb energy from microscopic thermal vibrations in a solid, and radiate the energy out and away from the solid, producing a drop in the object's temperature.

if an object excited by radiation at one frequency, can be made to emit radiation (heat) at higher frequencies carryirig more energy, it suffers a net loss of energy. As a result, the object cools down. . Scientists have thought that by pumping a fluorescent cooling element with a high-efficiency diode laser, it should be possible to construct a compact, all solid-state optical crycooler which would enable the widespread deployment of cryogenic electronics and detectors in space and elsewhere.

One can think of the principle here as some thing like cooling an object by'washing' it with 'cool' light. Light pours on tothe object, soaks up some of the vibrational or heat energy of the object, then carries away the excess energy.

it is not a very efficient process. The cooling power is only a small percentage of the absorbed laser power. Thus, while at the moment, it is far too inefficient to refrigerate food or cool a house, it will do very nicely for cooling high-tech devices to extremely. low temperatures.

Scientists now feel that this will lead eventually to their ability to cool objects down, to about 200'c below zero. Absolute zero, at which all motion ceases is -273'c.