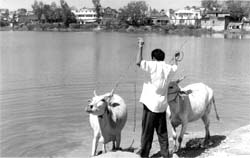 politicians and builders have joined hands in an attempt to destroy a water body which is the lifeline of residents of Balaghat in Madhya Pradesh. Though work has been stopped, the builders have succeeded in partially filling the 200-year-old Devi talab situated in the heart of the town, with the intention of developing it for commercial use.

This goes against the policy of the state government which is engaged in constructing several new water harvesting structures in its bid to tackle the water scarcity in several districts. The crores of rupees spent by the government to catch rainwater in districts like Jhabua is well documented.

Rishab Builders and Developers, a major construction company in the state, purchased the pond and the adjoining land to construct a supermarket and a housing colony after filling up the pond. The pond is spread over more than 5.5 hectares of land and is a source of irrigation, drinking water for animals, fishing and washing clothes. "They did not even bother to seek the permission of the district administration before commencing work," says Manu Srivastava, collector, Balaghat district.

Interestingly, the builders have already sold many plots even though large areas of the pond remain submerged under the water. Srivastava says: "We have filed cases against the builders for conversion of pond, violation of community rights and filling the pond without seeking permission from the district administration." According to an order of the sub-divisional officer of Balaghat, besides destroying a water body, the town's drainage system will also be adversely affected.

Recently, the builders were reported to have dumped burnt oil in the pond to kill the living organisms and render the pond useless. P L Punchia, assistant revenue inspector, Nagar Mahapalika, Balaghat, told Down To Earth that a pond cannot be converted into land for constructing buildings, unless the pond serves no useful purpose to the people.

Tilak Kochar, a social worker in Balaghat, alleges: "The nephew of the minister-in-charge of Balaghat district, Nikhi Ramji Kawre, is one of the partners in the builder's group. Pooran Kumar Advani, former Bharatiya Janata Party (bjp) president, Balaghat and party worker Mahendra Surana are also involved in the project."

The local people have formed a non-governmental organisation Paryavaran Raksha Samiti to prevent the builders from destroying the pond. Despite the district administration putting a stop to the work, the samiti keeps a close watch on the activities of the builders. "We will not let them destroy this pond. We are ready to pay any price for this," they say.