In search of hunger

While the fare at the Rome Food Summit was aimed mainly to help tummy trimming of ambitious plans drawn up earlier, the general feeling of the observer bordered around caution 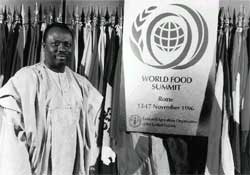 IT WAS humanity's tryst with the Great Hunger at the World Food Summit held in Rome from November 13-17. An impressive array of world leaders gathered there, pledging to banish hunger from the face of the earth. As per the tradition in earlier United Nations (un) gatherings, 106 nations -- among them some 86 heads of state and government -- adopted a statement of political commitment and an action plan, to help the needy improve their access to food. But veteran conference-watchers do not seem to be counting any chicken, as there is a cautious watch over the Summit leaders to turn their noble intentions into concrete action.

Jacques Diouf, director general of the Food and Agriculture Organization (fao), noted in his opening address to the Summit that participating governments, for the first time at the start of a major un meeting as this, already achieved consensus on Summit documents. It was easier for delegates, therefore, to devote their full attention towards implementing the Summit Plan of Action (SPA).

According to fao -- an organ of the un -- which organised the meet, 841 million people in developing countries do not have enough to eat. In many parts of the world, farmers are finding it increasingly difficult to keep food production ahead of population growth rates and last year, world grain reserves dipped to their lowest level in 20 years -- hitting a rockbottom supply of 48 days.

But equally important as food production is the question of access to food, says the fao. Ironically, at a 1974 global conference, also held in Rome, participating nations had pledged to end hunger "within a decade". Chastened by the failure to achieve that goal, a more modest target has been set in the Rome Declaration -- halving the number of undernourished people to 400 million by ad 2015 -- referred to by Cuban President Fidel Castro as "shamefully modest".

In the Declaration, governments pledged "common and national commitment to achieving food security for all". The measures outlined in the spa are largely normative, calling for integration into food security programmes such goals as gender balance, participation of local communities, sustainable use of local resources and better coordination among implementing agencies.
The Rome Declaration recognises poverty as a "major cause of food insecurity" and repeats calls of earlier un conferences for poverty alleviation. It states emphatically that "food should not be used as an instrument of political and economic pressure", without going on to mention two countries -- Cuba and Iraq -- that continue to face us-sponsored economic sanctions. But formal consensus on the Summit documents masked the undercurrent of disagreements among the participants about the role of liberalised trade policies, population stabilisation programmes and intensified farming in improving people's access to food.

Charlie Kronick of the International Charity Action Aid said in a newspaper interview, "The Food Summit is addressing the wrong questions. Increasingly, food security is not a question of agricultural policy but of trade policy." In a report released this month, Action Aid says food security in developing countries has been undermined by "a combination of food surpluses and exports from the North, and agricultural export drives from the South." According to fao data, many developing countries are growing less food than they did 20 years ago, as they are consuming more imported food.


Another source of disagreement, hardly an alien element in major un meetings, was the population policy. While inaugurating the Summit, Pope John Paul ii said, the problem of hunger will not be solved by focusing on population stabilisation alone. A large population "can prove to be a source of development because it involves exchanges and demands for goods", said the Pope. He called for rejection of the 'sophistry' which says "when there are many, one is condemned to be poor".

In her address to the Summit, Nafis Sadik, head of the un Population Fund stressed that "action on population policy in the next decade will determine our demographic future, and with it, future food needs". According to Sadik, world population by middle of the next century, could be as low as eight billion or as high as 12 billion -- depending on the success of population stabilisation programmes. This difference would be equal to the global population of 1975. "If women could choose, families could be smaller and the population growth slower," she said, assuring this would have a "decisive impact" on future food security.

Diouf's optimism notwithstanding, the 'consensus' on the Summit documents has not turned out to be as strong as hoped. The absence of the heads of state and government of the Group of Seven industrial nations in the meet was rather conspicuous, and more than one African leader noted it, almost wondering aloud if this reflected the commitment of these nations to the Summit. At the October 31 drafting session which led to the Rome Summit, at least 16 governments had said they would submit reservations or interpretive statements clarifying their individual positions on the documents.

Nevertheless, feels Anders Wijkman -- senior official with the un Development Program -- that the Summit documents can be useful. The Rome Declaration, "although general, gives us a platform", he said, adding, "For us as an implementing agency, it is much easier to start a dialogue with these governments based on these documents."