In the eye of a storm 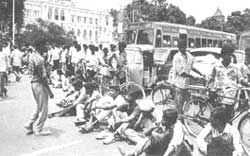 MEDICAL education is suddenly making news. A spate of student agitations in Tamil Nadu; an ordinance banning capitation fee in the state; a petition against private colleges in Andhra Pradesh; and, two ordinances by the Centre making it mandatory for new medical colleges to get prior approval from the government, are decisions taken in about a month.

The question being raised is, if privatisation has become the accepted dictum for the Indian economy, why should medical education be left out. But students fear if their education goes the 'capitalist' way, it may become too expensive.

The Andhra Pradesh state government recently gave private societies permission to start 12 medical and eight dental colleges -- allegedly with the involvement of top politicians. Students followed it with a petition to the Andhra Pradesh High Court to quash the order. Earlier, the Supreme Court had declared that all Indians have a fundamental right to education at all levels. Arguing that the private medical colleges would take capitation fees as 'donation' before admission, students quoted the judgement saying state-managed institutions cannot charge such fees.

In Tamil Nadu the situation was different. The Sri Ramachandra Medical College, situated a few km outside Madras city, was started in 1985, with the permission of the M.G. Ramachandran government, by a private trust reportedly close to the erstwhile government. In 1989, when the DMK came to power it took the college into the government fold. The Trust successfuly challenged the takeover in the Madras High Court. Based on the court order the health minister reprivatised the college. But the students, vary of the implications of privatisation responded sharply.

In an unprecendented gesture, students from almost all medical colleges in Tamil Nadu went on a strike. The state government's response to the strike was equally strong. It issued an order to close all medical colleges in the state. Undeterred, the students continued their agitation holding street plays, sit-ins and a relay hunger strike. As a compromise the state government issued an ordinance banning the collection of capitation fees. The ordinance prohibits all educational institutions from receiving any amount "by whatever name called" over and above the fees which the government is empowered to prescribe. Privatisation will have to wait now, at least in Tamil nadu medical colleges. But the students do not believe the law will work and continue to agitate as before.