In the red with green measures 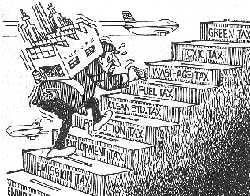 GREEN is not a popular colour in Europe at the moment -- at least not with industry. Flattened under the weight of over 200 environment protection rules, many European companies are afraid that they may lose the sharp edge of the market wedge.

British prime minister John Major clarified Britain's obdurate stand on the issue: "The UK's commitment in principle to environmental protection must not come at the expense of industry and competitiveness." The European Community (EC) and Continental environmentalists, however, tend to be less fractious and apprehensive. Jacques Delors, the Community's president, says, "An ambitious environmental...policy could create hundreds of thousands of jobs."

Unfortunately, this is cold comfort to industrialists who believe that they are shelling out far more than necessary in order to meet the exacting EC standards. The oil and chemical industries are bearing the brunt of numerous legislative measures for environmental protection.

Concawe, the oil industry's European lobby, claims that the cost of toeing the new limits on sulphur in fuel oils will amount to $3.3 billion in the short term and over $5 billion in the long run. Similarly, UK's chemical industry says that expenses on environmental protection rose from 9 per cent to 14 per cent of operational costs between 1990 and 1992. EC regulations have also turned the heat on Germany's electricity industry, which has spent $37.62 billion on cleaning up its power stations.

The possibility of European industry losing its competitive edge looms large, both in comparison with the developing world and its counterpart in the industrialised countries. Cumulative spending by public and private sectors in northern European countries appears to outstrip that of Canada and Japan and to be nearly equivalent to that in the US -- between 1.4 per cent to 1.6 per cent of GDP, says Financial Times, quoting a study by the Organisation for Economic Cooperation and Development.

The proliferation of environmental rules in Europe test the might of even heavyweight companies. Stiff mercury emission standards compelled ICI, the international chemical group, to close down its chlorine plant at Hillhouse in the UK.

The industry's fears, however, do not cut much ice with European politicians and environmentalists, who say that such legislation will benefit industry in the long run because it opens up new markets, encourages efficiency and spurs manufacturers to produce "green products" popular with consumers.


The other side to the picture is that the environmental technology industry has registered a huge leap. Water companies in the UK, for instance, have developed an export market for water treatment devices. But the benefits are confined to the high-tech countries like Germany, the US and Japan.

Besides, although environmental rules do goad industry into minimising inputs and reducing waste, it believes that this could have been achieved even without formal regulation. Says Michael Wright of ICI, "We could have been doing this without regulation, had we focused on it. But it depends on where you put your effort." Further, manufacturers are uncertain about the extent to which a green product could raise their bottomline. Green products often go hand in hand with product improvement.

European countries are scrutinising the new proposals that emanate from Brussels more carefully. Several EC schemes -- a tax on fuel and its carbon content among them -- have pranged. Another plan to recycle packaging material had to be scaled down after an ambitious German recycling scheme over-extended itself and had a near brush with bankruptcy.

Developing countries also have a bone to pick with the EC. Many apprehend that Europe will use environment to justify stifling imports from the Third World. A move in this direction is the German green dot system, which makes it obligatory for exporting countries to either recycle or take back packaging material -- a financially unviable proposition for many developing nations. A shot across the bows came from a recent German ban on a consignment of Indian tea which had apparently crossed the pesticide safe limit.

A positive effect of the current debate in Europe is that it may make for the development of more rational and cost-effective environmental rules. Hopefully, the benefits of such a move will percolate down to countries that may trade with Europe.