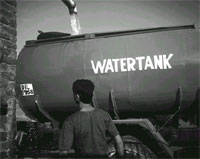 delhiites once again faced a severe round of water shortage in the first week of November. The Delhi Jal Board (djb), however, had no clue about when the situation would improve. The crisis began soon after the Uttar Pradesh irrigation department commenced maintenance work at the Upper Ganga Canal, which supplies raw water to the Bhagirathi Water Treat ment Plant. However, the djb maintained that due to cleaning operations there was a 17 per cent reduction in the total production of the plant. This, the residents of the affected areas in east and south Delhi, say is not true because the water shortage had hit all the areas supplied by the plant.

When asked about the situation, senior officials pleaded ignorance about the specifics and said that probably many of the affected areas are unauthorised colonies or may be at the tail end of the supply line. One of the dvb officials complained that sending water tankers is of no use because many colonies have very narrow lanes.