While US vice-president Al Gore cast his lot with the anti-incinerator, industry greens, residents of East Liverpool, Ohio, got together to protest the loss of the incinerator job bonanza. 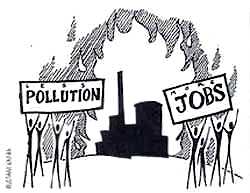 THE CLINTON administration jumped into a contentious issue even before assuming office by announcing it would block a final-stage, testing permit for a hazardous waste incinerator in East Liverpool, Ohio. Vice-president Al Gore, casting his lot with a Greenpeace campaign to stop the US incinerator industry, said there are "serious questions" about the safety of the Ohio facility. Critics warn of possible environmental and health hazards due to lead emissions from the incinerator.

On the other hand, supporters point out the incinerator, being built by the Swiss company Von Roll, would mean hundreds of "good jobs at good wages", $2.3 million annually in tax receipts and encouragement to foreign investors. Pointing out that throughout his election campaign, Gore had promised, "Pollution control will yield a jobs bonanza", East Liverpool residents demonstrated outside Greenpeace offices, demanding the plant and the jobs it would bring.

The $160-million incinerator, to be operated by Von Roll, will be able to burn 60,000 tonnes of toxic waste a year. The company spent 13 years overcoming objections to the incinerator. It already has regulatory permission for a 720-hour burn of hazardous wastes, which, if successful, will be followed by a trial burn, for which permission is still needed. Gore has asked the General Accounting Office, an arm of Congress, to investigate the licensing process for this facility.

While the Environmental Protection Agency (EPA) spokesperson Mary Culler says if the test burn reveals "any kind of emission that does not look like it is safe, we will certainly modify their permit to reflect that", Gore counters that the health effects of the plant's emissions and the legality of its permit "have been consistently downplayed or ignored by the EPA".

Gore's support to Greenpeace has antagonised industry supporters. The Asian Wall Street Journal, in an editorial, wrote, "The Greenpeace Luddites see environmentalism as the club with which they'll beat down technology." At stake is Al Gore's credentials as the environmental vice-president who cares for jobs.