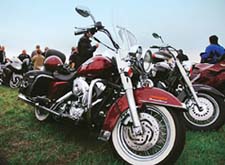 bowing to an aggressive us offensive, the Indian government recently allowed the import of the us's iconic Harley Davidson bikes.

The decision, which came on April 13, 2007, is part of a deal that exempts all bikes with an engine displacement size of more than 800 cc from meeting Indian emissions standards and has arbitrarily fixed European emissions standards for them. This subverts the Central Motor Vehicles Act and Rules (cmvr), 1989, which emissions regulations fall under in India. But vehicles will have to comply with European Commission's emissions regulations and meet the Euro iii norms.

In return, the us allowed entry of Indian mangoes, hitherto barred for failing us pesticide standards.The Union commerce and industry minister Kamal Nath has reportedly said: "The good news is that our mangoes are going to America and Harley Davidson is coming here." Indian farmers, however, have not been exempted from us pesticide regulations and will now irradiate the fruit to fit us standards.

The large engines of Harleys are nearly the same size as that of small Indian cars and cannot meet stringent Indian emissions standards. Initially, the Union ministry of shipping, road transport and highways, responsible for setting emissions regulations, raised objections to lowering standards for this privileged import. But faced with us pressure, a group was created with representatives from the ministries of commerce, petroleum, heavy industries, environment, and road transport and highways ministries to push the decision.

Indian officials claim the bikes are too expensive to be sold in large numbers, so the exemption will not impact air quality. But the notification has not linked the exemption with another cmvr provision: if sales exceed 250 over six consecutive months Indian tests will become mandatory.