India doubts the ability of the British to understand the complexity of Indian ecosystems and suggest measures for their conservation. 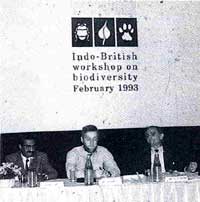 SERIOUS differences over biodiversity management surfaced during an Indo-British workshop held recently in New Delhi to prepare a blueprint for conservation of biodiversity in different Indian ecosystems. With the British wanting easy access to information on genetic resources and the Indians doubting the ability of "those from other cultures" to understand the complexity of their ecosystems, the workshop, which was sponsored by the British Council, got bogged down in issues raised by the ongoing North-South debate on conservation of biodiversity (See also: "Uncertainty increases over convention terms").

Among the major issues that cropped up during the workshop were the importance of people's needs in the management of natural resources and technical solutions to conserve sensitive ecosystems.
The British participants offered expertise to manage scientific data. They recognised that the knowledge base was already there with the people. "We will return the same knowledge to the people by introducing a simple technique for effective conservation," said G Lucas of the Royal Botanical Society. But Indian participants were sceptical of this supervisory role because, according to them, the extremely sensitive ecosystems enlisted in India for management are beyond the experience of most Western managers.

An Indian expert who had participated in the field workshop to examine ways to check siltation in the Chilika wetlands said American and British experts offered conflicting solutions. He explained, "While USA has ruled out dredging in the area fearing loss of fauna and flora from the base of the lake, the British have advocated partial dredging along with extensive silt traps."

The Indian concern for guarding against Western prescriptions was endorsed by participants from other Asian countries. S A Hussain of the Asian Wetland Bureau in Kuala Lumpur advocated greater subregional cooperation for appropriate local solutions and pointed to the damaging impact of the flood control methods proposed by Western donor agencies on water bodies in Bangladesh.

The large difference in perception of ecosystems was evident in the case of wetlands in east Calcutta which were seen as a drainage system for sewage by the British experts. But Ashish K Ghosh, director of the Zoological Survey of India and a member of the wetland team, says, "The Calcutta wetland is a spill basin and a natural salt lake. The colonial rulers had cut a channel through it to carry the sewage waste to the Kulti estuaries. But along the channel, the sewage water used to be diverted to fish ponds at different points."

An assessment of productivity of different domesticated animal breeds in the country is also essential. "There are probably 30 breeds of domesticated cows in the country, but some of them are already extinct. While our breeds are performing well in other countries, we are letting them disappear here," says Ghosh.

And, added Ghosh, "The British may want to protect the Sundarbans mangroves for their genetic wealth, but the local people want their mangrove forests to shelter them against cyclones. It is from these local perceptions that the management inputs will have to come."