Cheap hydroelectric power in the Himalayan region will not be forthcoming in the near future, going by the proceedings OF a seminar hold recently in Nepal. 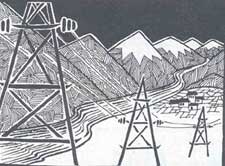 INEXPENSIVE and plentiful Himalayan hydroelectric power remains a dream, with Nepal's total installed capacity standing at only 250 MW. Most Nepalese lack electricity and those linked to the grid suffer periodic power cuts. However, judging by a recent seminar in Kathmandu on Cooperative Development of Himalayan Water Resources, turning the dream into reality looks harder than envisaged.

Some speakers blamed India for the slow pace of water development and a discussion of fiiture flows witnessed proponents of a high-tech, dash-for-growth policy clashing with those favouring a bottom-up, capacity-building approach. There was widespread agreement, however, on the need for a more open attitude to scientific information and this was recommended at three of the four working sessions.

Many participants, particularly those from Nepal, said a more genuinely cooperative approach on India's part would speed up the harnessing of hydroelectric power.

The strongest criticism of India came from Bhini Subba, former director general of Bhutan's department of power. He urged India to stop treating projects in Nepal and Bhutan as if they were being planned as routine additions to India's own utilities and called for an end to development on a project-by-project basis.

However, Kamala Prasad, distinguished visiting fellow at the Institute of Rural Management in Anand, Gujarat, strongly defended the success of India's bilateral negotiations. He said a project-by-project approach had yielded good dividends. As India needed large quantities of water and was prepared to pay for it, Prasad added, it sought a technological, rather than political, approach. Prasad urged this should be need-based water-sharing, instead of "sterile insistence on water rights".

Rajendra D Joshi of the Institute of Engineering in Nepal called for rapid cooperative development of resources in the region so as to enable Nepal to achieve an estimated potential of 83,000 MW a year, mainly for export to India, Bangladesh and Pakistan between 2010 and 2055. On the other hand, Bikash Pandey, programme manager of the Intermediate Technology Group in Nepal, proposed a trickle-up approach.

Joshi envisaged Pakistan would find power supplied by Nepal attractive after 2010, whereas hydroelectric power would be critical for India after about 2020 - when India's fossil fuels would probably be exhausted - and for Bangladesh, by 2035.

Pandey was more concerned with building up capacity in Nepal itself, preferably by small private projects. "If the option of developing hydroelectric power through local industry is lost," he commented, "it condemns urban Nepalese to escalating electricity prices and periodic power s4ortages on the grid, and will deny ipral Nepalese access to electric p1pwer forever."

Pandey's analysis indicated that energy from large government schemes was 50 per cent more expensive than small (1,001-15,000 'KW), mini (101-1,000 KW) and micro (94.5-100 KW) schemes. Instead, he argued, power generation should be decentralised and handed over to the private sector, and local industry should be involved in hydroelectric power development.

- With further investment, he estimated, the local hydro industry could grow at 15 per cent a year, doubling capacity within five years. Investments in electro-mechanical equipment, associated industries and humanpower would be of an unprecedented magnitude and Pandey warned only such investment could enable Nepal to build the big hydroelectric plants that would be needed in the next century.

Asked why both his and Joshi's approaches could not be adopted, Pandey replied that if Nepal went ahead with the planned Arun 111 hydroelectric project at a cost of US $760 million, the government would not be interested in developing micro-hydroelectric capability. Also warning against the hightech route to water resources development was Rishi Shah, member secretary of the Royal Nepal Academy of Science and Technology (RONAST). "Mega-projects are in trouble around the world," he commented, "Yet we fall into the trap of believing that big is beautiful." And, added International Rivers Network president Phil Williams, "Big dams are really hydro-technical experiments. It will take decades'to understand the results."

Dipak Gyawali of the Royal Nepal Academy of Science and Technology and Othmar Schwank from a Swiss organisation, INFRAS, in a joint paper,ascribed the continuing conflict between Nepal and India to scientific uncertainties.

Comparing a Swiss-German project with the Indo-Nepali Tanakpur barrage, they argue that a good database would have had an impact on the choice of technology and would probably have dictated 1hat the barrage be situated several kilometres upstream from the chosen site.

Says Gyawali, "This poor state of science has meant that science does not lead decision-making but events lead to scientific evaluation-after the fact, a sure recipe for having a perpetually disgruntled neighbour to live with."

"Good science is also good management science," says the paper. "The Swiss-German example provides for a German commissioner to sit on the management committee of the Swiss plant to ensure a proper functioning of the power station and correct allocation of the mutually agreed benefits. The broad, state-level Tanakpur agreement has not yet come to addressing these operational issues."

Marcus Moench of the US Pacific Institute said his research into groundwater in India showed figures with little scientific certainty had been used to capture funds. "Ready availability of accurate, information is an important prerequisite for the emergence of management systems," he commented.

Pleas for recognition of the importance of accessible, sound data were not confined to hydrology and geology. Environmental and social factors have too often been undervalued in project assessment, several speakers said. As Jayanta Bandyopadhyay, a leading Himalayan ecologist, put it: "Sophisticated mathematics on power projects are, not balanced by sophisticated social engineering."