Says views on breeder technology hostile to the country 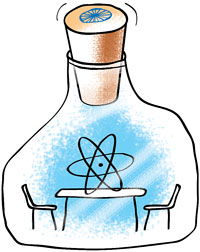 THE government of India barred a group of nuclear scientists from holding their annual meeting in India. Union Ministry of External Affairs refused permission to the International Panel on Fissile Materials (IPFM) to hold its meeting scheduled for December 9, terming its views “hostile to India”.

IPFM is an independent group of two dozen arms control and nonproliferation experts from 17 countries. Sources said the reason behind the government’s refusal could be a report brought out by some experts associated with the group in February 2010. The report, Fast Breeder Reactor Programs: History and Status, raised safety concerns associated with nuclear breeder reactors and criticised breeder technology. This technology plays a key role in India’s threestage nuclear power programme.

The report stated that after six decades and an expenditure of tens of billions of dollars, the promise of breeder reactors remains unfulfilled and efforts to commercialise them have been steadily cut back in most countries. “Russia and India are building demonstration breeder reactors. In both cases, however, their breeder (and spent fuel reprocessing) programs leave much to be desired regarding the availability of data on reliability, safety and economics.

In the case of India, there is also the potential for use of breeder reactors to produce plutonium for weapons,” the report recorded.

R Rajaraman, professor of physics at Jawaharlal Nehru University in New Delhi and co-chairperson of the panel, who had proposed the idea of conducting the annual meeting in India, said there has been no trouble in holding the meeting in any other part of the world.

“We have had the annual meeting in Japan, UK, USA, China, Canada and the Netherlands where local governments welcomed us,” he said. In Japan, the government disagreed with the group’s views but the meeting was conducted amicably. Rajaraman said he had told IPFM members that India is a very open society and they could hold their interaction there. He noted the government’s refusal is being seen as an undemocratic step by many panel members.

Frank Von Hippel, professor of public and international affairs at Princeton University in the US and member of IPFM, said it was beyond his comprehension how “government of the largest democracy could refuse discussions with independent experts.” In reply to an e-mail query by Down To Earth, he wrote the group has met with government officials in Beijing, The Hague, London, Ottawa, Tokyo and Washington, and in some of these capitals, the IPFM criticised the government’s policy of promoting reprocessing of fuel with the resulting accumulation of separated, weapon-usable plutonium.

In Washington, the IPFM disagreed with the Barack Obama administration’s decision not to include pre-existing stocks in a Fissile Material Cutoff Treaty. “But our discussions were civilised and informative to both sides,” he said. He hoped to have similar discussions with government officials in New Delhi. “I suppose the government officials could have refused to meet us,” he added. The external affairs ministry spokesperson did not reply to a query mailed by Down To Earth on refusing permission.