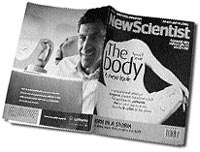 New Scientist
New Scientist, one of the world's most popular and prestigious science journals, is considering an Indian edition. The journal's editor Jeremy Webb was in India in the second week of December to explore the market potential. "India is growing quickly in scientific prowess, and it seems the public are enthusiastic to find out more," he said.

New Scientist seeks to demystify science for the popular reader, and "remove jargon". Webb reiterated the importance of science education in a world of accelerating climate change and fast-paced technology. "If people really want to understand what the world will be in 10 years' time, it's science news that they should be looking at," he noted.

If the plan for an Indian edition of N ew Scientist goes as per Webb's plans, this would be the first time in the last three decades that a leading foreign science magazine will be published from India.