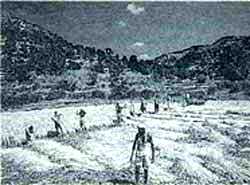 A study sponsored by the Asian Development Bank (ABD)reveals that although India is not a major contributor to global greenhouse gas emissions, it's geographical location renders it particularly vulnerable to the impacts of global warming.

An analysis of several climate change scenarios reveals that crop yields in India could be disturbed by changes in temperature and altered concentrations of carbon dioxide. The effects will be felt differently in different regions.

Simulations of altered climate conditions reveal that wheat yields will be hit hard. The researchers report that if carbon dioxide concentrations increase to 550 ppmv, with average or above average rain, wheat yields are likely to increase. However, increasing temperatures, an expected consequence of a global increase in carbon dioxide, will lead to a decrease in wheat yields. Rice yields in the coastal areas, where the productivity is low, will notbe affected much, but yields in the more productive regions of Haryana and Punjab are likely to droop. However, the researchers caution that the results are preliminary and should not be used as a basis for policymaking.

The report outlines the quantity of greenhouse gas emissions, particularly carbon dioxide and methane emissions from the energy, industry, agriculture and forestry sectors, and also elaborates on the effects that increasing global levels of these gases will have on India and its economy. This report, called the India Country Report, is part of a larger ADB-funded study which involves several other countries in the region, including Bangladesh, Indonesia, Malaysia, Pakistan, Vietnam, the Philippines and Sri Lanka.

According to the experts, the climate change projections made so far on the basis of available model studies do not indicate a change in the Indian summer monsoon or cyclonic activity during the next few decades. However, the climate models need to be refined and developed further, and additional data collected before objective inferences are made.

By far the most exhaustively studied impact of climate change is on the country's coastal regions. Experts expect that with a rise in global temperatures, sea levels will rise, with adverse impact. Vast tracts of cropland and valuable mangroves, which are unique to this region, could be inundated. Besides damage to coastal infrastructure, this would result in the loss of freshwater supplies due to percolation of seawater. The report reckons that over 7 million people are at risk and the impacts of sea level rise could cost as much as Rs 184,767 crore (see Down to Earth, issue 53). At the present level of analysis, experts believe, the impact of climate change on forests in India is likely to be minimal.