Global Tuberculosis Report says 900,000 cases in India are either not diagnosed or not reported to health authorities

The report says that total 2.9 million TB cases are being missed every year. Of this, 75 per cent cases (people, who were either not diagnosed or diagnosed but not reported to national TB control programmes) were in 12 countries. India accounts for 0.9 million (31 per cent) cases that go unreported. 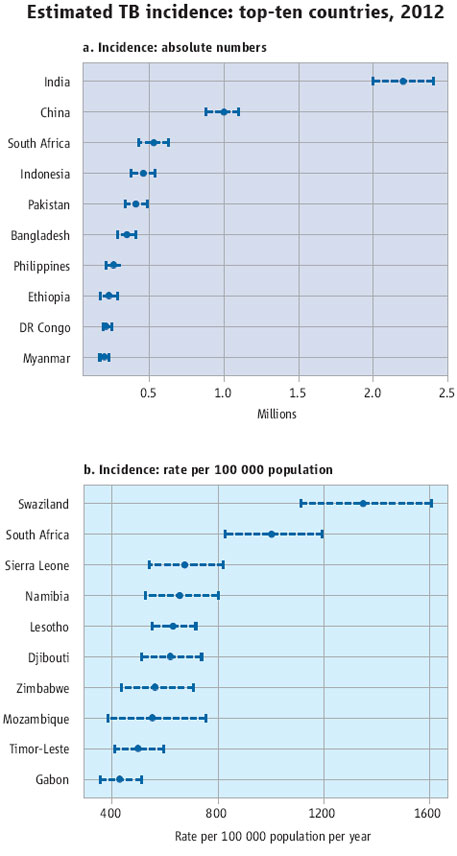 The global burden of TB remains enormous. In 2012, around 8.6 million people got infected with TB and 1.3 million people died of the disease (940,000 people who died were HIV-negative and 320,000 were HIV-positive). Among these, an estimated 170,000 were suffering from multiple drug resistant or MDR-TB.

WHO estimates that 450, 000 people fell ill with MDR-TB in 2012 alone. China, India and the Russian Federation have the highest burden of MDR-TB followed by 24 other countries.

TB mortality rate has declined by 45 per cent in the world since 1990 and WHO said that the Stop TB Partnership target of a 50 per cent reduction by 2015 is within reach.  Mortality and incidence rates are falling in all six WHO regions.

For achieving the millennium development goal in TB treatment by 2015, WHO suggests to address challenges like detecting three million missing cases and also controlling drug-resistant TB.

This is the eighteenth global report on TB published by WHO in a series that started in 1997. The report provides assessment of progress in TB control campaign and progress in implementing and Â´Â¼Ã¼nancing TB prevention, care and control at global, regional and country levels using data reported by 197 countries.