From being a net exporter of timber, India has turned into its net importer. The reversal stems from the country's soaring demand for industrial roundwood. This was highlighted at the 35th session of the International Tropical Timber Council (ITTC-35) in Tokyo from November 3-8 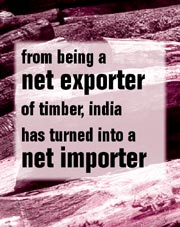 from being a net exporter of timber, India has turned into its net importer. The reversal stems from the country's soaring demand for industrial roundwood. This was highlighted at the 35th session of the International Tropical Timber Council (ittc-35) in Tokyo from November 3-8. Moreover, sensitive issues such as labour rights and environmental services of forests were taken up during talks on a new International Tropical Timber Agreement (itta). India, which should ideally have played an active role in these meetings, was not even represented.

The International Tropical Timber Organisation (itto) was established by the first itta in 1983 to provide a framework for consultation among countries that form the world timber economy. Headquartered in Tokyo, its main objective is to ensure that all tropical timber products traded internationally by its members originate from sustainably managed forests. The body is governed by the 58-member ittc.

Former Planning Commission secretary N C Saxena is, however, sceptical: "I am wary of figures that show huge increases in demand because the general trend over the past few years has been quite flat." But Maharaj Muthoo of the forum maintains: "The increasing demand for timber in India is due to the resurgence of the domestic economy and the rapid expansion of the middle and upper-income groups." Muthoo believes that India could meet future demand by importing timber.

On the contrary, Ram Prasad, ex-director of the Bhopal-based Indian Institute of Forest Management, feels that the demand gap should be bridged by increasing domestic production. He says that India's policy should simply be: anyone who plants trees can cut them.

Removing constraints such as restrictions on the felling and transportation of timber can help increase domestic production. "It is very clear that if we have to balance demand and supply, we cannot solely rely on government agencies. Farmers, too, will have to be involved," points out Planning Commission member D N Tewari. He is confident that if all states remove these constraints, and if the Greening India Programme (gip) launched under the tenth five-year plan is implemented successfully, India will once again become a net exporter of timber by 2012. It may be noted that gip aims to restore forest cover to 33 per cent in 2012 from its current level of 21 per cent, regenerate 39 million hectares of degraded forestland and develop the agroforestry sector.

Achieving these targets may prove to be an uphill task, considering the Union ministry of environment and forests' (moef) complacency and inefficiency. The ministry's incompetence came to the fore recently when it didn't send any official to attend the two Tokyo meetings. Repeated attempts by Down To Earth to seek an explanation from the director general of forests, who is India's nodal officer for itto, proved futile. However, some officials blamed internal politics for India's inability to decide on who would represent it!

Meanwhile, in the second preparatory committee meeting for negotiating a successor agreement to the 1994 itta, which expires in December 2004, delegates agreed to include formulations similar to labour clauses in other commodity pacts on coffee and cocoa. But attempts to broaden the scope of the new itta to include the issue of environmental services of forests met with stiff resistance and so left unresolved.

These services include watershed protection, biodiversity protection and carbon sequestration. They are already being discussed in other forums but some countries felt that trade in such services had the potential to finance forest conservation (see box: Green gains ).

Even as moef continues to squabble over trivial matters, India could be left without a say in the new itta.