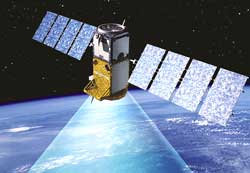 india's participation in a European navigation satellite system and eu backing for India's entry into a consortium of countries that put up an experimental nuclear fusion reactor are major highlights of the recently concluded sixth eu -India summit in New Delhi.

The eu-India pact about India joining the Galileo navigation satellite system, which rivals the us gps system and Russia's glonass system, marked the culmination of talks that had been in progress since January 2004. The 30-satellite constellation, to be in orbit by 2008, aims at contributing to develop agriculture and fisheries, environment monitoring and tracking anything from aircraft to cars. Unlike the other two global tracking systems, it is operated fully by civilians, though it has reserved one channel for military applications.

It is speculated India may pick up about 10 per cent stake in the us $4.3 billion project. But a spokesperson of Indian Space Research Organisation said "the nature of stake and modalities of paying the share will be decided later...We have just decided to join the project". India is the fourth non-European country, after China, Israel and Ukraine, to join the programme. The eu has also promised to support India's plans to join the us $4.5 billion International Thermonuclear Experimental Reactor (iter). Yet to be proven, iter will be the world's first nuclear fusion reactor, considerably safer than nuclear fission reactors currently employed to produce electricity from atom. The proposed reactor, which mimics energy generation in stars like the Sun, is being built in Cadarache in France. Apart from the eu, the us, Japan, South Korea and China are collaborators in the project, slated for completion after over four decades.

At the summit, British prime minister Tony Blair committed European assistance to India's Sarva Shiksha Abhiyan and the National Rural Health Mission. eu trade commissioner Peter Mandelson urged that with only 13 weeks left before the World Trade Organisation (wto) ministerial meeting in Hong Kong, India and the eu should "think and act with boldness and make the case for greater openness to the rest of the wto membership". But the summit didn't witness much boldness on the trade front. The joint action plan said "both parties agree to continue their dialogue with a view to greater convergence in areas of mutual interest". On the key issue of agricultural trade, there was no agreement on a timetable to cut eu subsidies and no finalisation of a formula to reduce agricultural tariffs.