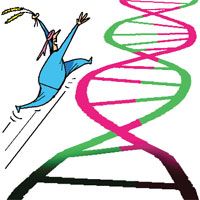 INDIA will soon be the first country to commercially cultivate biofortified pearl millet, or bajra. The crop has been biofortified to improve its iron and zinc nutrients, and will be released in 2012 by HarvestPlus, a global alliance of research and implementing agencies.

To be distributed in Rajasthan, Maharashtra, Gujarat and Uttar Pradesh, the crop has been developed by HarvestPlus’ sister concern International Crops Research Institute for the Semi-Arid Tropics (ICRISAT). “It targets hidden hunger of undernourished and malnourished people, especially the poor who are not able to meet micronutrient requirements from the food they eat,” said Howarth E Bouis, director, HarvestPlus (see ‘Fighting hidden hunger’).

However, it is too early to ascertain how useful biofortified pearl millet is, said B Sersikaran, director of National Institute of Nutrition at Hyderabad. “HarvestPlus has approached us for efficacy studies. We can comment on the success of the crop only after undertaking them,” he added.

“The crop is rich in iron, but how much of it is absorbed by the body would determine its success,” said V M Katoch, director general of ICMR. B Kodkany of Jawaharalal Nehru Medical College in Karnataka has undertaken a foundation study to measure the amount of iron and zinc in biofortified pearl millet absorbed by children, and compare it with absorption of minerals in non-biofortified commercial varieties.

Biofortified pearl millet aims to increase the absorption level of iron in people by 5 to 10 per cent, and grain yield by 5 to 6 per cent, said Kedar Rai, director HarvestPlus India bio-fortification programme and principal scientist at ICRISAT.

Though small in volume of production compared to wheat and rice, pearl millet is strategic because it is consumed by the poor in dry rural areas. About 35 million people eat pearl millet that costs much less than rice and wheat.

This new crop can be one of the strongest means to fight anaemia. It has 50-65 ppm iron, about twice more iron than modern wheat varieties, said Rai. Its increased zinc content is crucial for a person’s immunity, brain functions and reproductive health.

Biofortified crops are farmerfriendly, said Rai, as no separate agricultural practice is required to grow them. Seeds of biofortified pearl millet will be distributed free to companies so that they can multiply and sell them to farmers.

“Till now, only Maharashtra-based Nirmal Seed Private Limited has approached us. We have decided to give them the seed,” he added.