Intended as gift to Obama 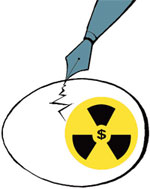 Washington was keen that New Delhi sign the Convention on Supplementary Compensation for Nuclear Damage; something Indian leaders had committed to when they signed the civil nuclear agreement with the US in 2008. India obliged just days before US President Barack Obama’s visit, beginning November 6.

India’s ambassador to Austria and to the International Atomic Energy Agency (IAEA), Dinkar Khullar, signed the convention at IAEA headquarters in Vienna.

The convention, adopted by IAEA, UN’s nuclear watchdog, mandates that nuclear plant operators pay a minimum compensation of 300 million sdrs (Special Drawing Rights, a quasi-currency, equalling US $450 million). It provides for a reserve funds pool for party nations to draw from when damages exceed 300 million sdrs.

With India now a signatory, the last obstacle in the way of US firms entering the Indian nuclear energy market has been cleared. Or so it seems. A domestic nuclear liability bill was a prerequisite for a country to sign the convention. India passed such an Act in August, but after including certain stringent provisions—sections 17(b) and 46 that allow legal action against suppliers in case an accident is caused by faulty or defective equipment.

The US tried pressuring India to drop these provisions when the bill was in motion. The government appeared keen to oblige, but a rap from the Opposition (BJP in this case) helped retain clauses relating to suppliers’ liability (see ‘Fresh row over nuclear bill’, Down To Earth, September 15, 2010).

Had India diluted suppliers’ liability clauses, American private nuclear suppliers—like General Electric Hitachi and Westinghouse Electric Company, that have signed mous with the Nuclear Power Corporation of India Limited—would have been exempted from liability in case of an accident in a nuclear reactor supplied by them. This is because the IAEA convention does not provide for suppliers’ liability unless there is agreement for one between an operator and a supplier. That was what US probably had in mind while putting pressure on India to dilute the nuclear bill. The US authorities have indicated they are pleased with India signing the treaty. It remains to be seen how India allays US fears on suppliers’ liability.

Anirudh Burman, analyst with prs Legislative Research, a think tank in Delhi, said India becoming a signatory to the convention does not make much difference. “Nuclear operations in India will be governed by the Civil Nuclear Liability Act, not the convention. The treaty will impact supplier’s liability only if India decides to amend its Act to conform with the convention,” he explained.