Better variety of a Thai flavouring plant in India 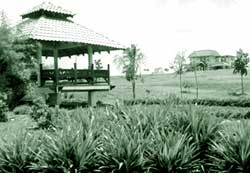 leaves of pandan plant (Pandanus amaryllifolius) are an integral part of traditional cooking in south east Asia. They are used to flavour preparations ranging from rice to chicken to sweet dishes. A team of Indian and Thai scientists has now found a wild variety of the plant in 24-Parganas district of West Bengal imparts more aroma than those found in Thailand itself.

The plant has higher quantities of 2-acetyl-1-pyrroline (2 ap), a naturally occurring chemical compound that lends the flavour and a greenish tinge to rice, according to researchers from the Kolkata-based Bose Institute and the Chiang Mai University in Thailand. In a paper that appeared in the December 10, 2004 issue of Current Science (Vol 87, No 11), the team said it has also developed a tissue culture protocol for mass cultivating the plant without affecting its ability to produce higher 2 ap content.

Pandan leaves are mostly added to ordinary rice to simulate the flavour of Thai jasmine rice, one of the world's best aromatic rice cultivars. They are also used as fragrant wrappers for grilled chicken or yam jam.