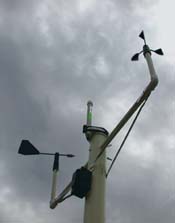 an archaic weather prediction model, giving out one national forecast for the country's six climatic zones, is fast losing its utility in the face of far more accurate models used by global meteorological agencies.

The disparity is evident, yet again, in this year's monsoon prediction. While the India Meteorological Department (imd) has predicted a five per cent less than average rainfall for the country, international weather organisations including the uk meteorological office say most parts of India are likely to get rainfall above normal levels.

Weather scientists in India attribute these variations to the difference in the weather prediction models used by imd and the international models.

While imd uses the age-old statistical model, international organisations like the us-based International Research Institute of Climate and Society, the uk Meteorological Office and the European Centre for Medium Range Weather Forecasts use the global circulation model (gcm). Most other institutes working on weather prediction in India also use gcm but imd is the nodal institute authorised to make forecasts.
"The statistical model uses weather conditions in March and April and previous years' data to predict monsoon rainfall. Since it is based on the principle of averaging, it fails to account for extreme or sudden changes in weather patterns. gcm is a dynamic model and forecasts each day on the basis of predictions of the previous day. This fits in extremes and sudden changes but if there is an error in input, it has a cumulative effect on future predictions," said P V Joseph, former director of imd."The dynamic model is based on physics of atmosphere and oceans, which in turn is based on sea surface temperatures."

Countries like France, the uk, the us, Japan, and Australia have long shifted to gcm. imd still uses the statistical model because of the institute's historical association with it and because gcm has not yet been satisfactorily customised for India.

Despite this, they agree that the statistical model is not very satisfactory and India has to switch to gcm.

imd says the predictions differ since conditions in the equatorial Pacific have changed from El Nio (warming of oceans) to La Nia (cooling).

Moderate El Nio conditions had developed over the equatorial Pacific in August 2006, but they disappeared in February 2007, giving way to La Nia. Some global models indicate a rapid transition to La Nia conditions over the next few months.

"We cannot generate regional forecasts now. They will come in June," Rajeevan said. He also pointed out that models used by global agencies are technically sophisticated but cannot capture activities in the Indian Ocean once monsoon sets in. "The memory of the sea is short. It's not possible to make long-range forecasts where the sea surface temperature parameter is the main component," a met official said.

imd is taking time to shift to gcm for lack of infrastructure and trained manpower.

imd sources emphasise that India's weather prediction matches global standards, but concede that some extreme weather events and sudden changes have not been predicted as efficiently by imd.

The Indian Meteorological Society, a conglomerate of weather scientists, has urged that all Indian forecasting agencies must have a single model for weather prediction.