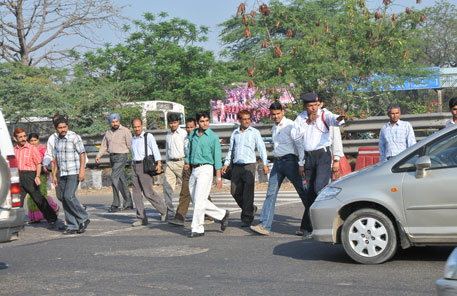 To address the problem of road safety, the Union Ministry of Road Transport and Highways (MoRTH) has published a draft Road Transport and Safety Bill for public comments and suggestions. If passed by Parliament, it would replace the existing Motor Vehicles Act of 1988.

While the bill should be aiming for zero mortality, it has set a target to save 200,000 lives in the first five years through reduction in road traffic accident deaths by strict implementation of laws. Additionally, it envisages a 4 per cent GDP improvement on account of increased efficiency and safety of road transport sector.

This much awaited bill comes at a time when accident deaths and injury have reached scary numbers in India. The global safety report of WHO states that India has the highest road traffic accident rate worldwide with over 140,000 deaths annually, beating even China. Road accidents are a serious problem, but little attention is being paid to this. While annually the nation loses almost 1.5 per cent of its GDP on account of road accidents, we are not even spending 10 per cent of that amount to make our roads safe. Every year almost 1.3 million people die in road mishaps, globally.

The draft Road Safety and Transport Bill, 2014, stresses on improving the system of catching an offender, streamlining issuance of driving licences, penalty, and registration of vehicles and introduction of digital systems. To check speed limit, it proposes use of the intelligent speed adaptation, driver alert control and eye drowsiness detector, but these are to be managed and made functional by the states at their level. The proposed road safety bill is focused more technology solutions than urban design solutions. There is also no clarity on monitoring and compliance strategies and institutional arrangements.

According to Sanjay Bandopdhyay, joint commissioner with MoRTH, “the Bill is in a draft stage and uploaded on MoRTH website for seeking feedback from general public and suggestions from stakeholders and will then be presented to Parliament in winter session”. The draft bill claims that it has been drafted in sync with the best practices of six advanced nations — US, Canada, Singapore, Japan, Germany and the UK.

The main focus of the bill is on stronger punitive action and penalty. It aims to make the penalties more stringent, with an aim to curb traffic violations. It has proposed steep penalties of up to Rs 3 lakh, along with a minimum seven-year imprisonment for death of a child in certain circumstances, besides huge fines for driving violations.

Several questions have been raised about the adequacy of the bill to address the problem of road safety.

Questions have been raised about the method of fixing the fines. “The amount of hefty fines that have been assigned for violations of traffic rules is going to increase under-reporting as the fine amount is heftier than salaries of most vehicle owners. The vast majority of drivers on Indian roads are two-wheeler riders, taxi, three-wheeler, personal and bus drivers who earn less than Rs 500 per day. The proposed fines are about 10 times higher than what they should be. The penalty amount has not been decided by keeping India’s per capita income in view. Secondly, as the deterrent is quite high it can lead to under-reporting which is already a major issue in India. A similar trend was seen in countries like Libya and Indonesia when extreme penalties were imposed,” says Geetam Tiwari, professor with the Department of Civil Engineering, Indian institute of Technology-Delhi. This can be achieved by deciding the amount of the fine on the basis of the net income of the offender as practiced in Sweden, Norway and Switzerland and probability of catching an offender increases as high as 30- 40 per cent, she adds.

Others have questioned the effectiveness of delivery of reforms. “The reforms created in road safety bill are similar to that existed in JNNURM and to our surprise not more than one or two cities could fulfill any of the reforms successfully in the last eight years in the JNNURM scheme. Creating similar reforms with similar set ups are again going to create parallel authorities with no specific transport solution. Thought has to be applied to understand why the reforms failed during JNNURM scheme and better alternatives need to be thought of at both city and state level” says G Gururaj, professor in the Department of Epidemiology, National Institute of Mental Health and Neuro Science, Bengaluru, who has been working on injury prevention and road safety prevention issues in developing countries for more than 10 years.

The bill proposes various authorities which aim to bring coordination and integration in multiple transport authorities and to improve road safety and vehicle regulation, aiding accountability and transparency in the planning and development of efficient multi-modal infrastructure.

But the there is no clarity about institutional arrangements. When it comes to catching the traffic offenders, the bill is not clear about who is going to collect the fine and how it is going to be utilised. “At present, in Delhi, around 15,000 people are caught violating traffic rules; they outnumber the staff present in Delhi traffic police by more than 25-30 per cent and they can be caught only if IT applications are used. Along with this, there has to be proper linkage and integration of the traffic and transportation data, which has to be linked either with the individual’s bank account. This would make it possible to recover penalty amount by debiting it from the individual’s bank account in case of failure to meet deadline,” says Anil Shukla, ACP, Delhi traffic police.

This bill has completely ignored the role of urban design in ensuring safe access. Countries such as Sweden, Japan, UK, and Netherlands have achieved reduction of accidents up to 60- 70 per cent, majorly through proper road design. The modal share of people using public transport or cycling is much higher than people using cars. The bill does not talk about a zero tolerance policy.

The bill will have to address the problem of road design that is currently oriented towards increasing the speed of vehicles. MoRTH has notified and revised the speed limits for highways keeping in mind the expansion of the road sector. Cars can drive at a maximum speed of 100 kmph and motorcycles at 80 kmph. The ministry justified the move saying that there was no speed limit for cars at national level. Only the local police set the norms. The ministry seems to be ignoring the fact that highways in India run mainly between the major cities in India. While it's up to the state governments and local authorities to notify the speed limit for vehicles plying on state highways, city and on rural roads, but even the speed limit of 50 km/h in a city does not imply safety on Indian roads.

The roads in India are designed keeping motorized vehicles in mind than pedestrians. Cities like Delhi have been increasing the width of the road and removing crossings and traffic lights to aid seamless trip for vehicles. The pedestrians and cyclists are always pushed to use foot over bridges by putting high railings on the medians, rendering them unsafe. Constructing wider and straight roads can only increase speed, even though the speed limit is restricted to 50 km/hr. “To change the paradigm, the government has to segregate the city and highway roads and the city roads have to be narrowed down with raised pedestrian crossings by keeping safety of pedestrians and cyclists than providing uninterrupted design for motor vehicles as practiced in Japan, Korea and Sweden” adds Geetam Tiwari.

Roads in India have to be designed keeping land uses and road activities in mind. Road design should include needs of pedestrians and cyclists. The bill has to take into account the principles of National Urban Transport Policy guidelines and other street design guidelines and they have to be made mandatory. The proposed road safety bill ought not to repeat the mistakes of JNNURM, which just brought in more projects of road widening, constructing signal free roads and making road infrastructure unsafe for vulnerable users such as pedestrians and cyclists. However good the bill maybe, but a stringent enforcement has to act as a deterrent.

According to global report on road safety in 2013 by WHO, “When Road infrastructure are designed, ensuring implementation of a number of safety measures and facilitating their implementation during construction with earmarked funding can produce important safety gains for all road users. This is particularly true when road design, construction and maintenance are underpinned by a Safe System approach, i.e. where allowances are made that can help compensate for human error, and roads and roadsides are built in such a way that their physical characteristics minimize potential harmful consequences to all. This could include incorporating speed management measures in road infrastructure projects, such as traffic calming intended to limit the impact of a crash.”

Globally, countries are moving towards zero tolerance policy on accidents and transforming urban and road design for safety. Road engineering and design can also influence the risk of crash involvement and the severity of crashes that do occur. Sweden has adopted “Vision Zero” policy which prioritises safety over speed—low urban speed-limits, pedestrian zones and barriers to separate cars from bikes are the key measures. It has proposed a speed limit of 30 km/hour, built 1,500 km of "2+1" roads where each lane of traffic takes turns to use a middle lane for overtaking – this has saved many lives. It has built 12,600 safer crossings along with strict policing that have halved the number of pedestrian deaths over the past five years.

The bill has the right intentions. But it needs more holistic approach with strong compliance strategies to prevent road injury and deaths. Along with punitive action it requires a much stronger preventive action.