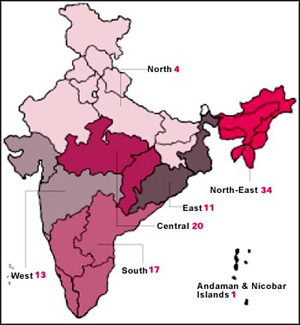 • According to the 2003 Forest Survey of India report, area under bamboo is 8.96 million hectares, or about 12.8 per cent of total forest area

• India has the world's largest bamboo forest, with 136 species, including 11 exotic ones. 58 species flourish in the north-eastern region alone

• 10 million people depend on bamboo as a livelihood source

• Commercially important species of bamboo usually mature in three years. After this, multiple harvests are possible every second year for up to 120 years in some species, and infinitely in others

• The bamboo mission programme will enable about 5.01 million families of artisans and farmers to cross the poverty line . According to estimates, investment in bamboo production enhancement would yield a five-fold return within 5-8 years

• The current demand of bamboo for various purposes is estimated at 26.69 million tonnes as against supply of 13.47 million tonnes

• Gregarious flowering will affect 30,000 square kilometres of bamboo forests during 2004-07. It will affect 18,000 sq km under 'muli' bamboo (Melocanna baccifera) in north-eastern states, with the epicentre in Mizoram. Standing bamboo will die after flowering. If harvested, it could turn the economy of the region around.