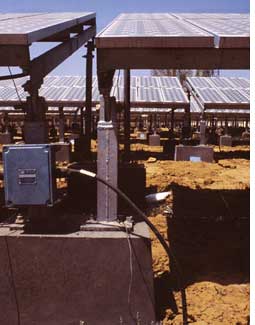 In one of the biggest pushes for solar power in the world, the Prime Minister's council on climate change gave the green signal to the Indian National Solar Mission on August 3. It has two major components: solar power generation and manufacture of equipment to achieve it.

India's capacity to generate solar power is negligible now: less than 10 megawatts (MW). The mission aims at 20,000 MW by 2020. Thereafter, it would aim at producing a tenth of the country's power from solar. This would amount to 100,000 MW by 2030. The mission aims to increase domestic capacity to manufacture solar power equipment. For this, it plans to have in place by 2017 manufacturing capacity of 5,000 MW per year.

A part of the National Action Plan on Climate Change, the mission will need funds to the tune of Rs 91,684 crore. This would cover the costs of regulatory policies, incentives, research and development.

A Solar Energy Authority of India will be created to implement the mission autonomously. The Union Ministry for New and Renewable Energy will support it. There is also a proposal to set up an autonomous Solar Energy Commission. The mission draft will be finalized, after taking into account comments of the members of the Prime Minister's council.


Several regulatory and fiscal incentives have been laid out to ensure the success of this project which spans three phases (see box). Under regulatory incentives, power supply firms will have to purchase a portion of their power from solar sources. They will be entitled to a higher fixed incentive to ease the burden of high prices.

Under the fiscal incentives, the solar power generators supplying to the grid (utility scale plants) will be entitled to tax cuts and exemption from customs and excise duties.

The mission details a funding roadmap. Its calculations rely on certain assumptions: it expects costs of creating the infrastructure to drop from Rs 20 crore per MW now to Rs 6-8 crore per MW by 2020. It anticipates a gradual drop in the tariffs for solar power generation--from the current Rs 18 per kilowatt hour (kWh) to Rs 5.6 per kWh by 2020. As the tariff falls, the fixed incentive would also be reduced.

By 2020, solar power generation cost is expected to decrease to levels of all other energy sources, which are expected to increase at an average rate of 3 per cent per annum (they are Rs 3-5 per kWh now).

The success of the mission will depend on trends following the projected path.


The transition to solar power will be expensive. The proportion of money to be raised domestically and that expected from multilateral investments is unclear. The project is silent about the source of funds. There are suggestions that the money should come from developed countries, to pay for their historical emissions burden.