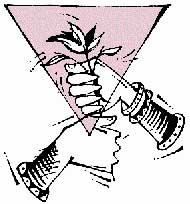 a plant powder reportedly used by the adivasis of Bihar as oral contraceptive, has been confirmed by scientists to have anti-pregnancy effects. A recent report said that the claims of tribal folklore, confirmed by modern scientific techniques, can actually show new ways of family planning.

Bihar's adivasi tribes have long been using a powdered concoction of the banjauri plant (Vicoa indica) to prevent pregnancy. The concoction which contains the dry plant powder and seven pepper seeds in water, is consumed daily on the second to the fifth day after childbirth or on the first 14 days of three consecutive menstrual cycles. Such treatment has been reported to induce permanent sterility.