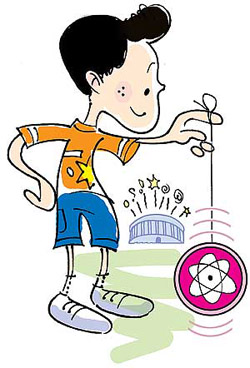 after nine hours of debate on the India- usa nuclear deal in the Rajya Sabha, the position of the Left and the opposition parties remained the same. They made it clear that their stand had not changed since July 2005, when the deal was announced first. On December 9, cpi (m) general secretary Prakash Karat said at a party meeting that his party would withdraw support from the United Progressive Alliance government. Brinda Karat, cpi (m) politburo member, however, clarified the party's position saying it had no intention of withdrawing support but was firm about not letting the nuclear deal through.

Amidst heated exchanges and mud-slinging, the Rajya Sabha debate on December 4 primarily focused on two issues. One, whether India could pursue an active military nuclear programme without American nuclear inspectors roaming around the country's facilities after the deal was signed? And two, did India stand to gain a significant quantum of energy?

Other issues like American strategic interests in South Asia, India's stand as a nonaligned country vis--vis its relations with other Asian nations, especially Iran and Russia, and whether American corporate interests were alone the driving force behind the deal, were also discussed.

Those opposing the deal said the 123 agreement didn't contain adequate safeguards to ensure that supply of nuclear material would continue in the event of India testing a nuclear device. Sitaram Yechury, a senior cpi (m) leader, said if India was to test a nuclear device, the us would seek back all fuel and technology under the Hyde Act, 2006, and the Atomic Energy Act, 1954. Yashwant Sinha, a bjp mp, reiterated that the commitment of uninterrupted fuel supply was not assured in the 123 agreement.

Congress mps Abhishek Manu Singhvi and Kapil Sibal countered saying the 123 agreement was governed by international laws under the Vienna convention and it takes precedence over us's domestic laws. Singhvi said the Hyde Act did not interfere with the agreement and in the case of a conflict, the agreement would be the last word.

There was a sharp divide over the deal's contribution in energy generation. While D Raja of cpi, Arun Shourie of bjp and Yechury said the deal would have minimal impact on India's energy security, K Kasturirangan, former director, Indian Space Research Organisation, and other Congress speakers said the deal would play an important role in diverting energy from fossil fuels.

Kasturirangan said nuclear plants have a high fixed cost and a low operating cost and also significant economies of scale. "Bigger plants produce electricity more cheaply and increase the competitiveness of nuclear electricity with respect to other sources of power. Bigger reactors of 1,000-1,600 mw are available in Russia and France," he said. According to him, India will be in a position to import the big reactors augmenting the country's nuclear capacity to 40,000 mw. He also said that by 2020, nuclear energy would comprise 15 per cent of the country's energy mix. Currently, it is at 2.4 per cent.

Questioning the commission's report, Shourie said the facts have been misrepresented. He said the 11th Five Year Plan, which kicks off in 2008, talks about addition of 3,160 mw through nuclear power from the existing 3,900 mw. For the 12th plan, the commission hopes another 13,500 mw will be added. "Further the date, the more daring you can become," Shourie said. He added that the Planning Commission had given two figures for the year 2020--a realistic figure of 21,000 mw and a far-fetched figure of 29,000 mw at the same time.

The opposition and the Left also questioned the fate of the Iran-Pakistan-India gas pipeline and the agreement to purchase four nuclear reactors from Russia.