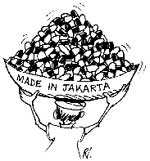 Local pharmaceutical groups in Jakarta have decried a draft law aimed at a drug patents crackdown by the government. The roaring medicine business in the city is attributed to several copies of same drugs being sold. And there is nothing to stop any of Indonesia's 240 drug companies from launching copies in the market.

The current draft law is designed to bring Indonesia's trade-related intellectual property rights (trips) laws in line with requirements stipulated under the World Trade Organization (wto). Now, the issue has become a bone of contention between a government keen to please the wto and local firms afraid of incurring losses in a sector that generates us $650 million per year.

The firms denounce a trips requirement that renders imports of patented raw materials illegal, unless obtained from the product's originator. They want the government to decree that raw materials for some of the products -- belonging to the us-based Pfizer, Belgium's ucb and Sweden's Astra, for instance -- be exempted.