Indonesia's decision to comply with the International Timber Trade Organisation's policy on tropical timber, has sparked fears of an adverse impact on trade. 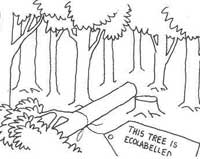 INDONESIA will start putting ecolabels on tropical timber from sustainable sources from 1995, in order to comply with the International Timber Trade Organisation's (ITTO) policy on ecolabelling. However, the decision has spawned doubts about enforcement and fears of a negative impact on the country's timber industry.

The ITTO policy maintains that by 2000, all tropical timber in international trade must be taken from sustainable resources. However, this was opposed by tropical timber producing countries (Down To Earth, May 31, 1993).

The forestry department admits ecolabelling might reduce damage to forests. And, as an official in the environment ministry said, Indonesia will have to adopt ecolabelling sooner or later because consumers are becoming environmentally conscious.

The industrial sector is nevertheless concerned. Soesanto Sahardjo, director general of Diverse Industries, proposed cooperation between the government and industry to counter the negative publicity about the country's timber industry. "We have to convince the world that we undertake forest conservation and sustainable forest exploitation," he said. Sahardjo proposed advertising in foreign papers, increasing promotional activities and intensifying lobbying in the main importing countries.

As part of its strategy to counter the negative publicity, the government has set up a special team called the Coordinating Team for Forest Product Industries, "to formulate measures and policies to counter unfair accusations abroad". It has also involved its diplomats in this endeavour.