There is one in our genes. And scientists are surprised at the distance signals can travel along DNA strands 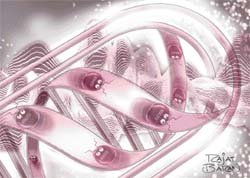 electrical signals from genes travel along a dna information "superhighway", according to the findings of Jacqueline Barton and her team at the California Institute of Technology in Pasadena, usa . Moreover, the signals can course through distances required to affect gene activity along dna ( Chemistry & Biology , Vol 6, No 2).

In August 1998, Barton and her colleagues had shown that electrons pass through short stretches of dna by hopping between overlapping electron clouds of the adjacent molecular building blocks of dna , which are known as neucleotide bases. The disc-shaped electron clouds of each individual base together form stacks. These stacks serve as electron-rich pathways for transmitting electrical signals.

This time around, Barton and her team were surprised by the distance a signal could travel. "It is a way of transmitting chemical information over a long distance that is dependant on a dna sequence," Barton points out. She guesses that the electrical signals might have a role in switching distant genes on or off.

The chemists found that signals could travel through 60-base chunks of dna 20 nanometres long (nonometre is one-billionth of a metre). This stretch is long enough to code for 20 amino acids. The molecular "switches", the dna promoters that turn on adjacent genes, are typically this long. The researchers have concluded that theoretically, there is no limit to the distance signals could travel along dna . "We are talking about biologically relevant distances, and you can have strange fantasies about what the implications might be," Barton indicates.

Interestingly, Barton's team also found that specific sequences of dna bases will stop the electrical signals. These "insulating" regions consist of single or multiple pairings between the two dna bases adenine (A) and thymine (T). "They serve as electronic hinges in the circuit," says Barton. The research group estimates that nature may have engineered these insulators to protect vital genes from electrical damage.

In fact, the researchers initially set out to study this type of damage to dna , which can be caused either by harmful chemical agents, known as free radicals, or by radiation. They inflicted this kind of damage on synthetic dna with ruthenium-based ions that mimic the effects of natural free radicals, which can cause cancer. But it was found that the presence of A and T pairings blocked this electron transfer. Barton believes that these electron traps might prevent the kind of dna damage that leads to cancer.

Tom Lindahl, a specialist in the study of dna damage at the Imperial Cancer Research Fund in South Mimms, Hertfordshire, uk , says that Barton's interpretation is "highly speculative". "But this is better evidence than has been available before that you get electron transport along a dna strand," he points out. Lindahl says Barton's finding that dna can be damaged away from the original oxidation site is more important. This might explain how single oxidising agents might be able to trigger clusters of mutation that can potentially lead to cancer, he points out.