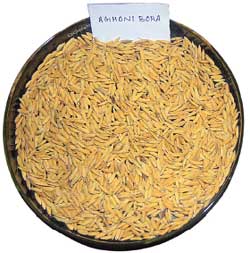 soaked in water, the parboiled rice grains expanded, softened and were ready to eat, surprisingly. Sharma had heard about rice that can be eaten without cooking but for the first time he saw it happen in front of his eyes.

There is not much that differentiates an Aghonibora soft rice grain from other rice varieties that grow in India. With a similar grain length and breadth of 5.85 and 2.12 mm, the plant grows 90 cm tall. The parboiled Aghonibora rice grains are yellowish in colour, too. Each grain is 7.65 per cent protein-rich, just like other rice varieties. But the similarity ends here. It makes for a dish of rice that need not be cooked.

Srigopal Sharma, chief scientist at the Central Rice Research Institute (crri) in Cuttack, makes a living by peering at the rice specimens lying in his office which also serves as his laboratory.Some days he takes a walk in the sprawling rice fields of the experimental plots in the institute. These days he spends his entire time working with Aghonibora, the variety named after aghoni the months of November, December when it is harvested .

Aghonibora has been grown in Assam for quite some time. During a trip to Arunachal Pradesh in 2007, Sharma made a stopover in a village in the Shonitpur district of Assam. Aghonibora is used as a breakfast cereal there. In fact, a farmer offered him some but its quality was not so good. However, seeing that it did not require any cooking got Sharma thinking about its prospects in Orissa.

We decided to test the feasibility of growing rice in the hot and humid climate of Orissa, said crris director T K Adhya. The temperature during the grain filling period varies between 16 and 18C in Assam whereas in Orissa it is between 25 to 28C. The humidity in Orissa is higharound 70 to 75 per cent. So the real challenge was to see whether it could be grown in these conditions.


The crri obtained Aghonibora from the Titabar Regional Research Station in Assam and experiments at the institute in Orissa began in 2008. The results were encouraging. Aghonibora, had an extremely low amylose (a starch that gives rice its hardness) content. That makes the grains so very soft and gives it the amazing quality of being ready-to-eat simply after soaking in water for 45 minutes at room temperature. When the water is lukewarm it takes 15 minutes. Adhya said that normal rice has 20 to 25 per cent amylose while that in soft rice is 4.5 per cent. Experiments in Cuttack showed that Aghonibora is also a variety that does not crave for extra expenditure or special treatment. It takes about 145 days to mature whereas normal rice varieties make their farmers wait three to six months. Aghonibora yields 4.5 tonnes per hectare (ha), much higher than the average 2.2 tonnes per ha for the country and 1.7 tonnes per ha for Orissa.

While a journal is yet to publish these finds, T Ahmad, the chief scientist at the Regional Agricultural Research Station (rars), Titabar, was surprised to hear about the finds. He said that Aghonibora developed by his institute was not soft and could not be eaten without cooking. He said that the scientists at crri must have resorted to some biochemical changes to make the rice soft after parboiling. Adhya, however, was firm in stating that no biochemistry had been resorted to. The variety obtained from Assam was simply purified and then grown in crri. Besides, Sharma also explained that rice varieties that have an amylose content of five to eight per cent are called soft. Hence Aghonibora with its 4.5 per cent is a borderline case.

Keeping the statements of both scientists in view, it might be that a difference in the environmental conditions due to a shift from Assam to Orissa brought about the change in the qualities of the rice.

crri will begin its field trials next year. The institute that has so far tested the crop only in the kharif season, will do so in the rabi season this year for the first time. We are also trying to reduce the duration of growth from 145 to 120 days, said the scientist.

This economical and environment-friendly soft rice is expected to be a hit in Orissa where eating soaked rice, locally known as pakhal, is a tradition. Pakhal is soaked after being cooked whereas soft rice does away with the whole idea of cooking, thus not only saving fuel but also the physical labour involved. It promises to keep the environment pollution-free.

We do not have specific energy audit for calculating how much energy will be saved. But considering an average of 10-15 minutes required for cooking a meal of rice, the energy usage can be worked out, said Adhya. He has distributed the seeds to farmers in Cuttack and Jagatsinghpur district of Orissa.