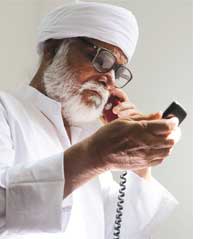 HAKAM SINGH, 59, runs a taxi business near the Inter State Bus Terminus at Kashmere Gate in New Delhi. He sits in a one-room office that overlooks the long rows of neatly parked black and yellow cabs. From morning till night, every day, he tends to phone calls while calculating judicious use of the taxis ensuring customer satisfaction.

Hakam Singh was diagnosed with diabetes mellitus five years ago. “I tend to get nervous and impulsive when my blood sugar fluctuate”, he said. To maintain levels, he injects himself with insulin twice a day, a hormone that aids the body cells in glucose uptake. Produced by pancreatic cells, insulin also assists the brain to process information and blood vessels to contract and expand in agreement with pressure changes.

Scientists recently conducted an experiment to confirm insulin’s take on cognition. When told about the study, Singh was interested. Since fluctuating blood glucose is a result of the body’s inability to use insulin, the team from the University of South Dakota, in USA, showed how blood sugar influences decision-making.

Sixty-five people were made to answer 14 questions. Their blood glucose level was measured and the first set of seven questions was supplied. Then they consumed either a sugar-containing drink or an artificially sweetened liquid following which there was a 10- minute break and the second set of questions. Upon completion their blood glucose level was tested again. Participants who drank a soft drink with sugar valued a higher future reward to a lower immediate one. The group which consumed the artificial sweetener placed more value in the i m m e d i a t e reward. For Singh this meant sending out taxis as and when he got a call and not saving a couple for his regulars.

“Blood glucose strengthens self-control by reducing impulse and making future rewards more attractive,” said X T Wang, the lead author. The study appeared in the January 20 issue of Psychological Science. “Our body can detect artificial sweeteners and react to the energy crisis by grabbing available resources immediately,” he added. Scientists at the Medical University of Graz in Austria established a relationship between insulin and the brain’s hippocampus which plays a role in long-term and spatial memory. The researchers studied a total of 24 Magnetic Resonance Images (MRIs) of the hippocampus in response to pictures of high-calorie foods. When people saw the food, the hippocampus was activated and the insulin levels increased resulting in high food intake. The study is in the February 18 issue of Obesity.

Scientists from Japan’s Tokyo Women’s Medical University, Waseda University and University of Toyama, demonstrated that middle-aged men with type 2 diabetes, a condition in which the body produces insulin but the cells fail to use it properly, were more impulsive. Hiroaki Kumano, the lead author, explained: “Metabolic changes such as chronic high blood glucose and low insulin action might be worsening the neurological deficits that lead to impulsive behaviour.” The study was published in BioPsychoSocial Medicine on February 11. Hakam Singh ruminated on his share of goof-ups when hungry: “Once I sent the taxi to the wrong address. My client had a flight to catch.”

Manufactured via genetic engineering, the insulin Singh uses is injected intravenously. There are efforts worldwide to simplify its use for enhanced action. Exubera, an inhalable form was introduced in the US in 2006 by the international pharmaceutical Pfizer. It was withdrawn as it led to lung cancer in some users.

Other areas of research include appetite suppressors as alternatives, insulin patches to avoid injections, implantable insulin monitoring pumps. “The best alternative is glucagon-like peptide (GLP) drugs. These drugs decrease appetite and slow down entry of food from stomach to intestine while increasing insulin release,” said Surender Kumar, senior endocrinologist at Sir Ganga Ram Hospital in New Delhi. This is good because the several functions insulin performs cannot be met by alternative drug forms.

The US Food and Drug Administration and European Medicines Agency approved the GLPdrug Victoza, made by Novo Nordisk, the healthcare company from Denmark. “The approval is a major advancement to help patients with type 2 diabetes achieve their individual treatment goals,” said Mads Krogsgaard Thomsen, Novo Nordisk’s chief science officer.