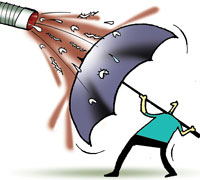 MARSH India, an insurance brokerage firm, has announced policy cover for water utilities against water contamination like the one witnessed in Doda district of Jammu and Kashmir in August. Over 1,000 persons suffered from gastroenteritis after drinking contaminated water; heavy rains and flash floods had damaged the supply network.

The policy, announced in the first week of September, can cover the cost of bottled or tanker water supply, and goodwill payments to consumers. The product will be launched in the Indian market by insurance companies. “We propose to work with insurers to structure and launch the product soon,” said Sanjay Kedia, chief of Marsh India. The insurance claim, said Marsh India officials, can be based on accidental contamination that may occur during or as a result of treatment and distribution of water and result in injury, disease or death within 365 days of consumption.

“Pollution should be accidental and arise from events which are beyond the control of the insured,” said Kedia. The trigger for a claim cannot be based on problems in raw water quality since utilities have to treat water for existing pollution, he added. The policy, with a limit of £10 million, compensates for sewage and bacterial contamination due to breakages in the piped network. It will also cover for malicious contamination and threats as well as incidents of holding utilities to ransom.

The premium would depend on the size of the water utility, profile of customers, limit of cover selected, quality control procedures followed and previous incidents, said Kedia. Fraudulent practices must also be factored into the policy, said Ulhas Divekar, technical director of the Indian Water Works Association, a voluntary organisation of water sector professionals. Insurance as a risk cover should not be misunderstood as an entitlement, he added.

Such policy may make sense in the developed world where regulatory checks and balances exist, said Bejon Misra, consumer activist in Delhi. There are no laws in India, said Misra, to make a water utility accountable to the people in the first place; the policy therefore will only insure the water provider against contamination incidents at the cost of the consumers’ health.

In the West, water utilities have to demonstrate due diligence in defence against incidents because supplying water unfit for human consumption is a criminal offence, said Michael Rouse, former head of the drinking water inspectorate in England and Wales. “I don’t think you can insure against the financial impact of a criminal conviction,” said Rouse.