New evidence on an ancient human species, Homo erectus, sheds light on their technical ability and capacity to use symbols for communication 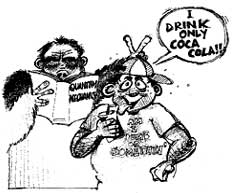 australian researchers in Indonesia have found evidence that questions the assumption that the intellectual capacity of primordial humans was far below that of the modern ( Homo sapiens ).

Anthropologists and other scientists have held that human intelligence crossed a threshold (a 'magical' rubicon) with the arrival of Homo sapiens , who replaced Homo erectus a million years ago. It was believed that Homo erectus was not intelligent enough to make anything more than crude stone tools. The new evidence shows that in some parts of the Western Pacific Homo erectus may have built and travelled on seagoing craft about 800,000 years ago. Earlier evidence of repeated sea crossings dates around 50,000 years ago.

The ability to construct vessels and presumably guide them over miles of ocean takes drastically more brain power and know-how than conventional theory attributes to Homo erectus , the big boned creature that flourished for 1.5 million years. The new evidence suggests that the cognitive capacity of this species may be due for a reappraisal that would entail considerable social organisation and use of complex symbols through speech or other means.

" Homo erectus was clearly not just a glorified chimp," said lead researcher Milce J Morwood of the Australian University of New England. Morwood's team examined two excavation sites on the eastern Indonesian island of Flores (about 15 miles -- 24 km -- from the nearest land mass) where stone tools and artifacts had been found a few years ago. According to Morwood, Homo erectus "must have had language for the collective effort needed to [make tools and artifacts]." Morwood and his colleagues sampled the layers of volcanic ash above and below the specimens, using a technique called fission track dating and dated them around 800,000 and 900,000 years old.

If Homo erectus travellers left the material, the only way they could have got there is by water. Morwood said that they built rafts, probably out of bamboo, which is buoyant and easily cut. "What is certain," he said, "is that they didn't invent rafts just to make that crossing." Instead, the Homo erectus population in that area would have rafts as part of their maritime culture.

For many experts, "the jury's still out" on that claim, said Rick Potts, director of the Human Origins Program at the Smithsonian Institution Washington, DC. "We look forward to more evidence. But if it's true, it's a really revolutionary idea," he added. To be sure, Homo erectus got around. The species made its way out of Africa and ventured as far as China and Indonesia 12 million years ago. But almost no one had suggested that the creatures had the requisite skills to manage a complicated endeavour like raft building.

Some sceptics have suggested that Flores may once have been connected to other land masses, which would more easily explain the presence of tools there. "But if there had been a land bridge, you'd expect [fossil evidence of] pigs and deer and other animals from the mainland," said Morwood. The island's impoverished animal record shows none.

Anthropologist Alison Brooks of the George Washington University, usa, was "not thoroughly convinced" by the argument. Fossils of a sort of archaic elephant called the Stegodon were found on the island, she noted, and 24 km "seems like a long distance" for such animals to swim. In addition, she said, "I am particularly 'underwhelmed' by the artifacts," which do not seem to be numerous or distinctive enough to be entirely conclusive. Potts seconds this. "I think the authors have taken the implications a little too far," said Potts, who was also concerned that the team did not use a broad range of techniques to date the site. However, Paul Renne, who heads the Berkeley Geochronology Center outside San Francisco, said that the method of dating seems to be "pretty secure".

Although short of definitive, the new research agrees with recent discoveries. "In the past five years, our idea of the cognitive ability of Homo erectus has greatly expanded," Potts said, following the discovery of sophisticated spears in Europe and intricate tools in Asia, both of which predate the arrival of Homo sapiens by hundreds of thousands of years. The Flores findings, Potts said, "are kind of going in the same direction."