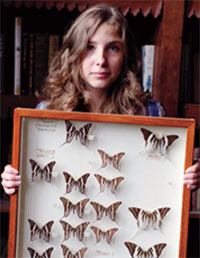 An Oxford museum intern has found rare specimens of butterflies lost since the 19th century. The specimens discovered by Athena Martin, 17, are described as “priceless” by the Oxford University Museum of Natural History. They had been brought back from South America by a Victorian naturalist but many of the butterflies were thought lost at sea in the 1850s.

Martin found them buried away in more than 3,000 separate drawers of butterflies at the museum when she was taking part in a science-related work experience project. The schoolgirl, who wants to study zoology, identified the butterflies collected by the naturalist, Alfred Russel Wallace.

Her biggest find was a butterfly called Dismorphia, brought from the Amazon.

The confusion over Wallace’s collection had been caused by a fire breaking out on his ship when he was bringing back specimens from South America in 1852.