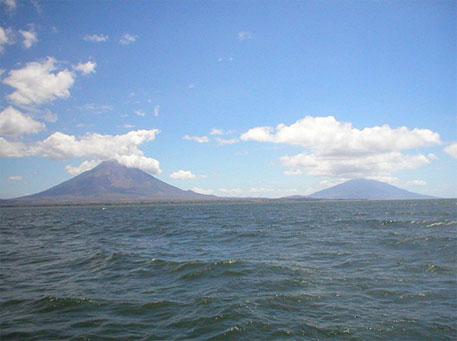 The canal will run 278 km from Venado Island in the Caribbean Sea to the Pacific port town of Brito, connecting the Atlantic Ocean with the Pacific Ocean. The route will cut through Lake Nicaragua, the largest fresh water source in Central America. Work on the project will begin on December 22 and is scheduled to be completed in 2019.

Meant to dwarf the neighbouring Panal Canal, the US $50 billion project would include an oil pipeline, an interoceanic “dry canal” freight railroad, two deepwater ports, two international airports and a series of free-trade zones along the canal route.

President Daniel Ortega's Sandinista National Liberation Front government insists that the project will be a game changer for the country and for the region. Paul Oquist, an advisor to Ortega, had told the Times that the canal project will allow Nicaragua to double its economic growth to double digits within the next four years. Oquist was quoted by the Guardian saying that the project will create 50,000 direct jobs and 200,000 to 250,000 indirectly and help the government reach its goal of reducing poverty. Over half the population currently lives below the poverty level and it is currently the second poorest country in Latin America.

But most Nicaraguans and civil society organisations do not agree with Ortega. In fact, they are sceptic about the intentions of his increasingly secretive government which has refused to make public any details involving the project's technical aspects, funding and impact on the environmental and livelihood of people. Those who had stood by Ortega during the revolution that overthrew often cruel and pervasively harsh Nicaraguan Somoza dictatorship in 1979, are also opposing him.

In June 2013, Ortega's government approved the project with scarcely a debate to a mysterious Hong Kong-based company—HK Nicaragua Canal Development Investment (HKND-Group)—owned by Chinese telecommunication magnate Wang Jing. Ortega has given him a 100-year concession to control a vast swath of Nicaragua and build and manage the waterway.

Though so far there is no indication that the Chinese government is interested in the project, media reports suggest that Wang Jing might have connection with Beijing's military. Whether all or part of the canal project is completed, it will give China an important presence on a continent it has been trying to penetrate with investments and trade.

Critics lash out against the project because will lead to the forcible removal of almost 300 communities in protected indigenous zones and will have massive environmental impacts.
Under the government and Wang's plans, ocean liners, super tankers and cargo ships much larger than those the Panama Canal can handle would traverse the waterway, impinging on the natural beauty of the region and raising the risk of oil-spill contamination while perhaps creating a new, if incongruous, tourist attraction. 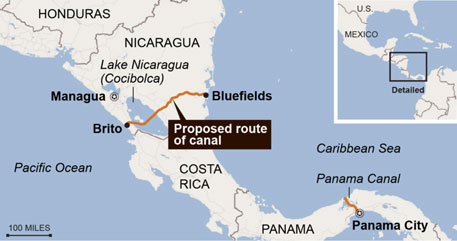 Across the lake, the canal will be up to 30 yards deep, and extensive dredging will be required, planners say. The Nicaraguan Academy of Sciences calculated that nearly 400,000 of tropical rainforest and wetlands could be destroyed by the project, jeopardising ecosystems, fishing and wildlife habitats. The canal would cut through two UNESCO biosphere reserves that are home to jaguars, sea turtles, great green macaws and other endangered species.

National Geographic experts who have studied the proposal say the project would transform environmentally sensitive wetlands into denuded dry zones, remove hardwood forests, and destroy habitants of vulnerable animals. As per the project plan, ocean liners, super tankers and cargo ships much larger than those the Panama Canal can handle would traverse the waterway. This could result in numerous environmental catastrophes such as oil spills and dirty salt water infecting pristine biological ecosystems.

In order for the canal route to reach the desired 90 feet depth, millions of tonnes of dynamite will be used to carve a path through the lake. The use of dynamite is an incredible risk that could easily destroy large areas of protected land and species in the lake and on Ometepe, the island home of many protected species of monkeys and other wildlife.

Environmentalists — including Ortega’s top environmental adviser — warn that the project could have disastrous consequences for the country’s water supply, including the massive Lake Nicaragua, considered a key source of drinking water for Central America in decades to come.

Civil-society groups also worry that Ortega’s Sandinista politburo and their new Chinese business partners intend to essentially create a privatised enclave in the middle of Nicaragua — one that will be governed for the next 100 years by their self-styled Canal Commission, regardless of which government is in power in Managua. “Nicaragua is not for sale. Nicaragua belongs to all Nicaraguans and is not the private property of Ortega and his family,” reads a declaration signed by 21 civil society organisations.

The government hired a British firm, Environmental Resources Management (ERM), to conduct an environmental impact study, but its release has been delayed repeatedly. Recently, ERM held a closed-door meeting with a select group of locals, but they didn’t extend invitations to everyone in the area who will be affected by looming expropriations.

There has been a deliberate effort not to disclose information and a deliberate effort to rush this project beyond reality," Monica Lopez Baltodano, an environmental attorney who heads Popol Na, a progressive social development group based in Managua, told La Times. The news website also quoted Jaime Morales, a congressman who served as vice president under Ortega until 2012, saying that few people oppose a canal per se. “But one that won't harm the lake. Water is Nicaragua's greatest patrimony... Expectation of great wealth makes many ignore what might happen to the lake.”