Cancer linked to polluted water in the Gangetic belt 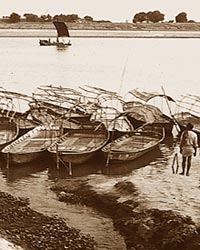 river water contaminated by heavy metals is the main reason why gall bladder cancer is widespread in the alluvial plains of Uttar Pradesh and western Bihar. These are the findings of a study conducted by researchers from the Institute of Medical Sciences, Banaras Hindu University, Varanasi.

Water of the Ganga river is used for bathing, drinking as well as irrigation in the two states. But the river is polluted by domestic sewage and industrial effluent, and contains concentrations of cadmium and other carcinogenic heavy metals that are much above the permissible limits of the World Health Organization.

During the study, the researchers examined bile (a digestive liquid secreted by the liver and stored in the gall bladder) of 96 patients facing either the problem of gall bladder stones or cancer. It was found that the concentrations of cadmium, chromium and lead were much higher in the bile samples of cancer patients than those having stones. "We established an indirect correlation between the disease incidences and the metals," says V K Shukla, the lead researcher.

Some experts, however, are sceptical about the findings. "The researchers should do a comparative study by including the healthy populations of the study area," asserts Harit Chaturvedi, a cancer surgeon at the Indraprastha Apollo Hospital, New Delhi. But Shukla feels that a comparative study is not needed as gall bladder cancer occurs mainly in the northern parts of India.

Denigration notwithstanding, the study is one of the few to establish linkages between a fatal disease in the highly populated ecosensitive region and the growing presence of toxic metals in the river. "The findings highlight the affects of toxins on our health. They need to be explored further," concludes Dinesh Pendharkar, a cancer specialist at Batra Hospital, New Delhi.