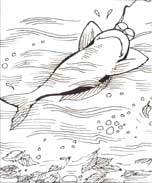 A catfish, Synodontis nigriventris, native to the rainforest streams of central Africa, swims with its belly upwards, but not because it is afraid that the heavens will crash on its head. The strange behaviour, say researcher Lauren Chapman and her colleagues at the University of Florida, is to help the fish make the most of the scarce oxygen, much of which is consumed by rotting leaves in the streams of Central Africa (BBC Wildlife, Vol 12, No 8).

By switching into an upside-down position the catfish is able to inhale oxygen that forms a thin layer just below the water surface.