IPCC in for change of climate

Big changes are expected as the global body acts on review committee’s advice at plenary meet in Busan, South Korea

IN ALL probability, the Inter-governmental Panel on Climate Change (IPCC)’s 32nd plenary between October 11 and 14 in Busan, South Korea, will be overshadowed by a 100-page report on its workings. The InterAcademy Council (IAC), a multinational organisation of science academies that reviewed the workings, has asked IPCC to bring method to its climate change research and assessment. The council reviewed the processes and procedures IPCC adopted at the behest of the UN and the global body on climate change. IAC submitted its report in end August.

“(Its) current management and governance structure is not as effective as necessary,” the report said. The representatives of 194 member countries now have the tough job of bringing IPCC to that level of effectiveness. This means fundamental reform. Starting from modifying the way it selects authors to changing the tenure of its chair and cochairs, the IAC report has recommended a management and governance makeover. IPCC’s main task is to publish reports every six years assessing the risks of climate change caused by human activity. These reports form the basis of inter-governmental negotiations on mitigation measures.

The review was ordered after a series of errors were detected in IPCC’s fourth assessment report. The most notable was the prediction that at the current rate of global warming, Himalayan glaciers would disappear by 2035. It cast doubts over the scientific robustness of IPCC’s assessments. Harold T Shapiro, who chaired the IAC review committee, believes IPCC “represents a significant social innovation”. Even he admitted, “I think the errors did dent the credibility of the process.”

The review committee found IPCC got its glacier-melt prediction wrong mainly because of the way it deals with review comments; there were definite apprehensions about the forecast, the report pointed out, but lead authors failed to seriously pursue review comments.

This is critical given that IPCC does not do original research and depends primarily on a body of independent researches by various scientific bodies and other organisations, including not-for-profit advocacy groups.

There were 18 reviewers (both for the first and second drafts) for the draft text on Himalayan glaciers. Two of the reviewers suggested changes based on two peer-reviewed studies on the subject.

These two studies were conservative in their forecast of glacier melt. “Careful consideration of thoughtful review comments would have improved the quality of the report,” IAC said. IPCC’s fourth assessment report had over 90,000 review comments.

Extending the probe to the third assessment report, the committee examined 14,000 references cited; the aim was to gauge to what extent the papers used had been scientifically validated. 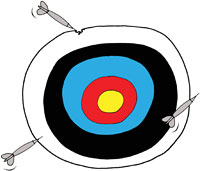 “In a scientific exercise like the IPCC report, everybody has to be ultra cautious with facts and their sources. The review committee has justifiably asked for better supervision,” said Sudhir Chella Rajan, professor in IIT Madras and author of The Suicidal Planet: How to Prevent Global Climate Catastrophe.

Highlighting such procedural lapses, the IAC report underlined that the assessments have not followed scientific procedures. IAC reached out to more than 400 scientists and individuals, seeking feedback on IPCC besides conducting a series of reviews on its own.

Much of the feedback emphasised IPCC needed to reinforce the authority of its review editors. “The IPCC should strengthen and enforce its procedure for the use of unpublished and non-peerreviewed literature,” the report said.

The IAC report has also questioned scoping meetings that outline the assessment reports; by doing so the review committee has questioned the basic procedure of IPCC’s assessment of climate change. IPCC normally invites scientists and government representatives to these crucial meetings. Many scientists have expressed frustration at not being invited despite their scientific credentials. “IPCC should make the process and criteria for selecting participants for scoping meetings more transparent,” the IAC report commented.

Scoping meetings are too early a stage to pre-judge the outcomes of an assessment, the report commented; this makes it difficult to incorporate emerging scientific advances and new insights into the assessment. “What the report indicates is that IPCC has to keep pace with the increasing demands for more scientific inputs while maintaining high accountability,” said Krishna AchutaRao Associate Professor at IIT Delhi’s Centre for Atmospheric Science.

IAC also dwelt at length on IPCC’s governance aspect. The report said the global body’s structure does not match up to its responsibilities. It asked IPCC to completely change its decision-making process, which has remained the same since it was formed in 1988. It has suggested limiting the IPCC leadership’s term—including that of its chairperson— to only one term. “A fixed term is important because over time it allows for a greater variety of perspectives and approaches to the assessments, and turnover in leadership is one key to maintain the ongoing vitality of assessments,” the report said.

Making a direct comment on the current chairperson, Rajendra Pachauri, into his second term now, the review said, “A 12-year appointment (two terms) is too long for a field as dynamic and contested as climate change.” Immediately after the IAC submitted its review, Pachauri welcomed the recommendations, but declined to resign based on the one-term recommendation (see table: ‘Call for action’).

The Council found there was no rigorous conflict-of-interest policy in place. This was significant because of a series of allegations against Pachauri for his engagement with industries and organisations dealing with energy and climate change.

Though the Council did not have the mandate to investigate the allegations, it did mention them. The Council recommended that the IPCC adopt such a policy that applies to all individuals directly involved in the preparation of reports, including the chairperson and vice chairpersons.

Reviewing IPCC’s management the report suggested an elected executive director to lead the secretariat and handle day-to-day operations. “Relying so heavily on a sole spokesperson (currently chairperson Pachauri) carries the risk that audiences will not appreciate the collaborative process involved in developing IPCC positions,” the report said giving its rationale for creating multiple layers of leadership.

The focus now shifts to IPCC’s plenary that will act upon on these recommendations. “People’s perception of climate science suffered due to these oversights in the IPCC report. But, it can be restored if the plenary takes serious note of the recommendations,” said Somya Dutta, national convenor of Bharat Jan Vigyan Jatha, a public science popularisation campaign that focuses on climate change now. IPCC is already working on its fifth report (to be published by 2014) with an army of more than 800 climate scientists. It cannot afford another Himalayan blunder. 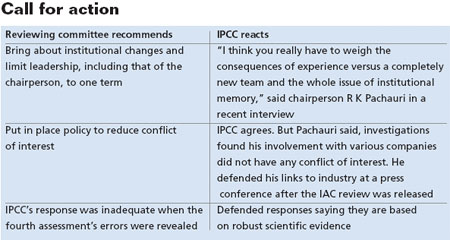