Multiple vaccinations torment US soldiers after the Iraq war 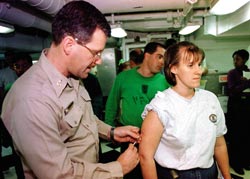 following the conflict in Iraq, four soldiers are threatening to sue the us ministry of defence claiming they are suffering symptoms akin to the Gulf war syndrome. The anonymous soldiers blame their ailments -- depression, eczema and breathing problems -- on vaccinations designed to protect them against the effects of chemical weapons. Just before the commencement of the war, the soldiers were given five inoculations in one day, followed by an anthrax vaccination five days later and a second dose a week after that. Of the four, two were unable to make it to Iraq because of acute reaction to the vaccines. One of the other two had to be flown back home 10 days after the fight started.

"Their symptoms are identical to those experienced by the veterans of the first Gulf war," says solicitor Mark McGhee, who is representing the soldiers. "The only difference is the onset of the effects much earlier," asserts Charles Plumridge, senior coordinator of the uk-based National Gulf Veterans and Families Association. Symptoms such as mood swings and depression were reported about three or four months after the troops returned home from the 1991 conflict.

Simon Wessely of the King's College, the uk, concedes it is possible that the multiple vaccinations, and the speed with which they were administered, could have led to the problems. However, a us government-funded review states there is "little evidence" to support the assertion. The us ministry of defence accepts that some troops may suffer long-term health problems, but it disputes that the sickness suffered by the veterans of the Gulf war amounts to a 'syndrome'.

The warning signals should be taken seriously. A new study makes it all the more important. The research, by the us-based Naval Health Research Centre, and the Centres for Disease Control and Prevention, shows infants born to the male veterans of the 1991 war have higher rates of two types of heart valve defects. The researchers examined birth defect data from 1989-93. They found a higher rate of a genital urinary defect in boys conceived after the conflict by women veterans. In addition, children of the veterans born post-war had a certain kidney defect that was not found in their kids born before the conflict. The researchers, however, do not have enough information to link the birth defects with exposure to poisonous gases and other toxic substances, which many veterans suspect are culprits of their mysterious illnesses and their children's health problems.