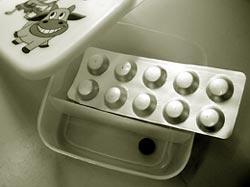 Researchers from the New Delhi-based All India Institute of Medical Sciences have found that a large number of children in primary schools of the city are deficient in iron, which is crucial for brain development. Iron deficiency, known as anaemia, is also linked to poor capability for skilled movement.

The researchers studied 39 children, aged 6-11, from 30 government schools. "Almost 66 per cent of them are affected by anaemia," informs Umesh Kapil, the lead researcher. The problem is due to the inadequate intake of nutritious food.

As per Kapil, it is a must to include school children in the National Anaemia Control Programme. He also advocates giving iron tablets along with the midday meal provided to children in government schools of the city.