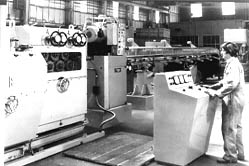 following recent reports of emission of dioxins from iron and steel plants in Europe, federal environmental agencies in usa and Canada are planning to launch a bilateral effort to probe dioxin emissions from such plants. Dioxins are carcinogens that are emitted when certain highly-chlorinated compounds are burned.

Some recent European studies have indicated that iron and steel producers are major sources of dioxins in the atmosphere. Environmental groups such as Greenpeace have been calling for regulations against these emissions. In particular, the recycling process known as "sintering" employed by mills that use electric arc furnaces has come in for criticism from the environmental lobby. In the uk , iron and steel facilities are the second largest source of airborne dioxin, municipal waste incineration being the first. Government-sponsored studies in the Netherlands and Australia have also implicated iron and steel plants as a significant source of dioxin. Even as similar plants exist in the us , environmental agencies have not conducted any stack tests to investigate the dioxin levels (Environmental Science and Technology , Vol 31, No 10).

"Right now, we do not have that much data in North America," says Patrick Finlay of the environmental protection branch of Environment Canada, an Ottawa-based organisation. "The Europeans have proposed that iron and steel facilities may be major sources of dioxin. But we do not know if that is the case in the us ," says David Cleverly, scientist at the Office of Research and Development of the California-based Environmental Protection Agency (epa). Canadian researchers are especially eager to learn about dioxin emissions from us plants as much of the acid rain problem in Canada has been attributed to sulphur dioxide emissions from the us.

The proposed joint programme would include stack tests at various iron and steel plants. epa has already started conducting the tests at two plants in Illinois and Ohio. A major problem would be the cost of the programme. Each stack test can run up a bill of us $50,000. Another would be opposition from the iron and steel industry. "There is certainly some question about whether the European data are transferable to this country," said Nancy Gravatt of the American Iron and Steel Institute.