Is Orissa prepared for disaster?

In October 1999, two cyclones devastated coastal Orissa, leaving nearly 30,000 dead in 14 districts. Immediately after, the Orissa State Disaster Mitigation Authority (osdma) was formed. So why is it that, 5 years later, Orissa simply isn't prepared for disaster?

For one: multiple agencies, and complete non-coordination. osdma's administrative authority is the revenue department, and the chief secretary takes policy decisions. osdma works in conjunction with central agencies, the state government and the 30 district administrations that run the state. It also works with non-governmental organisations, community-based organisations, un agencies and specialised disaster management organisations. As a result, explains Biswanath Das of Jewaharlal Nehru University, who has recently surveyed coastal Orissa, "Nobody knows how the information will come down to the village level if a cyclone occurs now." 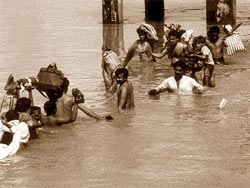 Secondly, the reach of mitigation programmes is extremely poor. osdma is implementing a Community-based Disaster Preparedness Programmes (cbdp) -- funded by the United Nations Development Programme and the Department for International Development. But cbdp is confined to only 10 out of 128 cyclone-affected blocks. Says osdma managing director Sanyal, "As far as flow of information is concerned, we have distributed radios in villages where accessibility is a problem. If any disaster occurs, villagers will get information directly." The problem is radio-antennas are put on bamboo poles. Could these poles withstand wind speeds greater than 100 kmph?

Could not osdma have thought of solutions such as plantations all along the coast, for trees are good wind-breakers? No. That, says Sanyal, is the domain of the forest department. Other lessons haven't been learnt, such as that cyclones here invariably cause tidal waves: since 1999, this fact finds no place in plans.

So is Orissa prepared for another super-cyclone? No.