Is this state sponsored land grab? 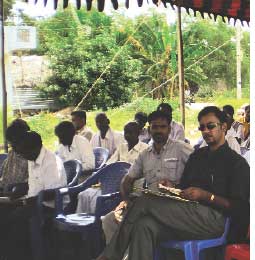 THE Tamil Nadu government is acquiring land for setting up special economic zones (sezs) at breakneck speed. Much of this land is being acquired by intimidating farmers or by preventing them from selling their land through a freeze on land registration. These were the findings of a public audit carried out on October 24 and 25 by a panel comprising Supreme Court advocates, academics and social activists.

The audit spanned six districts of Tamil Nadu and is part of a national audit of sezs being carried out by civil society groups. The findings, presented in Chennai on October 26, said land acquisition for sezs in Tamil Nadu is in violation of the state governments industrial policy of 2007 that guarantees fair and open process of acquisition without coercion. The policy excludes agricultural land.As many as 139 sezs being set up in the state, are in varying stages of notification and approval.

One of the group of panelists found that in Sriperumbudur in Kanchipuram district, the State Industries Promotion Corporation (sipcot) acquired 13 ha gifted to the landless under the Bhoodan movement. In Tiruvannamalai district where Lotus footwear sez is being set up, dalits were forced to part with 40.5 ha gifted to them by the government.

Four villages in Cheyyar were specifically targeted as the backward classes lack the ability to oppose acquisition, said Shanmuga Velayutham, a panelist and professor in Loyola College of Chennai. The panelists said government is acquiring large tracts of cultivable land also.

sipcot manager Vincent Pakhiraj insisted only barren land is being acquired. He said gifted land has not been acquired anywhere. There are three committees to identify land for acquisition after inspection to rule out discrepancies, Pakhiraj said.