Is UN giving in to industry? 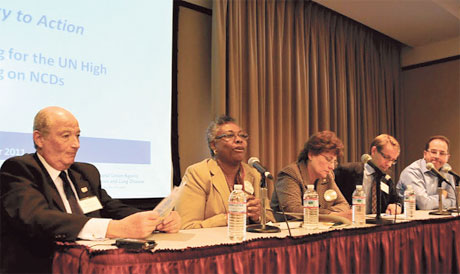 THE UN General Assembly has adopted a watered-down political declaration to reduce the burden of chronic lifestyle diseases. The event signals the beginning of a larger fight between industry and health policy makers.

The resolution was passed at a summit ahead of the General Assembly in New York on September 19. The unanimous acceptance came after meetings with industry, civil society and governments who created weaker declaration acceptable to all member states.

All that the resolution calls for is just a comprehensive campaign by governments, industry and civil society groups to combat non-communicable diseases (NCDs), including cancer, heart diseases, diabetes and chronic respiratory ailments. There are no clear targets to curb the diseases or commitment for funds, say policy watchers. (See ‘NCD battle starts now’)

Outcome of the NCD summit was unlike the first health summit at the UN in 2001. It had led to the creation of The Global Fund to Fight AIDS, Tuberculosis and Malaria, the largest funding agency for those diseases that has attracted rock stars like Bono and John Legend to its cause.

Urging for urgent action against NCDs as well, Margaret Chan, Director-General of WHO, called the diseases a “slow-motion disaster” that could turn back economic progress of nations.

“The entire NGO community would have liked to see more measures and specificity and goal setting,” says John Seffrin, chief executive officer of the American Cancer Society. “Goal setting is important if you want to do something effective,” says Seffrin who is optimistic that targets will be established in the coming years.

Passage of the declaration calls into question the multimillion-dollar food and beverage industry’s use of high fructose corn syrup, high amounts of salt, fats and other chemical additives, which are often implicated for NCDs.

NGOs therefore criticise the involvement of industry in the negotiation process, arguing that there is a conflict of interest. It comes as no surprise that the declaration did not set targets for reduction of these ingredients in food.

Besides, much hope was pinned on the declaration; that it would help lay down strong regulations for the tobacco industry, which is majorly responsible for lung cancer. Menghaney says the declaration lost the opportunity to strengthen existing global conventions like the Framework Convention on Tobacco Control (FCTC). Countries like Brazil and Australia are currently under pressure from the tobacco industry to not implement FCTC recommendations.

Thomas Frieden, director of the USÃ”Ã‡ÃªCenters for Disease Control and Prevention, however, points out that not all industries have vested interests in NCDs; the insurance industry, for one, stands to lose millions of dollars as populations age and NCDs rise.

Timothy Wirth, president of the UN Foundation, says the real use of the declaration would be in legitimising actions on these diseases in nations where the stamp of UN approval carries much weight. “In some countries, it is terribly important what the UN says and does.”

“Frankly speaking, it (the declaration) was quite lukewarm,” says Bertil Lindblad of UNAIDS. Since patients with HIV/AIDS are at greater risk of chronic disease, the two issues link together, he says. However, the declaration gives WHO a powerful “tool” or political leverage to negotiate with industry and civil society in future, he says. How much WHO will exercise this political leverage in regulating the industries that are deeply entangled in the fight remains to be seen.

According to a study by Harvard University in the US and the World Economic Forum, NCDs are expected to cost the global economy US $47 trillion over the next two decades.