It is for real 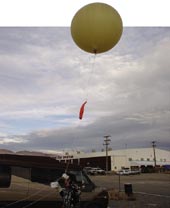 for years, the advocates of climate change have faced a major stumbling block -- satellite measurements of temperatures in the troposphere (lower atmosphere) were found to be inconsistent with the increasing surface temperatures of the Earth. Now a team of us scientists has found that the troposphere has actually been warming faster than the surface for more than two decades. The scientists, from the University of Washington and the National Oceanic and Atmospheric Administration (noaa), report their findings in the journal Nature (Vol 429, No 6987, May 6, 2004).

The team examined data of microwave radiations emitted by oxygen in the atmosphere. The radiations were recorded between 1979 and 2001 by noaa's polar orbiting satellites. The data was used to deduce temperatures in different layers of the atmosphere. Different channels of the satellites' microwave-sounding units had measured radiations emitted at different frequencies, thus providing data for different layers of the atmosphere. For the troposphere, which extends from the surface to an altitude of about 12 kilometres, the temperature was measured by channel 2 of the microwave sounding units. But those readings were imprecise because about one-fifth of the signal actually came from a higher atmospheric layer called the stratosphere. "Because of ozone depletion and the increase of greenhouse gases, the stratosphere is cooling about five times faster than the rates at which the troposphere is warming. So the channel 2 measurement provided us with little information on the temperature trend in the lower atmosphere," explains Qiang Fu, the lead researcher.

Stratosphere temperatures are measured by channel 4 of the microwave units. Fu's team used data from weather balloons to solve the quandary. The scientists correlated the troposphere temperature data from balloons with the simulated radiation in the two satellite channels to determine which part of the channel 2 measurement had come from the cooling stratosphere and hence should not be considered. What remained indicated that the troposphere has been warming by about 0.2c per decade. That closely resembles measurements of warming at the surface.

The findings, Fu says, could mean a paradigm shift in climate change discussion. They should at least provide food for thought to the us policymakers.